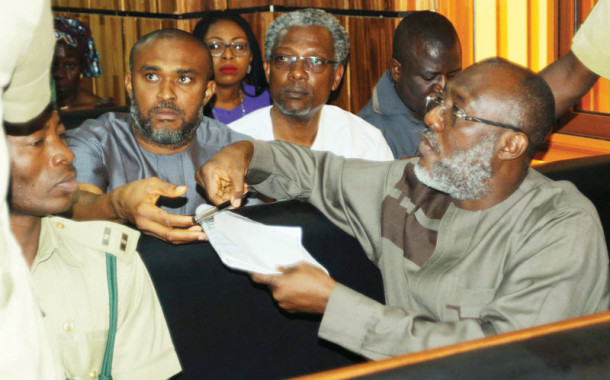 A High Court of the Federal Capital Territory (FCT) in Maitama, Abuja has dismissed a N500 million suit brought against former Peoples Democratic Party (PDP) spokesman, Olisa Metuh, his wife, Kanayo and one of their security aides, Oche Gambo.

In a judgment on Thursday, Justice Folashade Ojo held that the plaintiffs – the management of an Abuja-based private school – British Nigerian Academy (formerly attended by Metuh’s son, Derrick) and two of its staff – Kola Pele (Vice Principal) and Hamzat Maftau (a teacher) failed to prove their case against the defendants.

The plaintiffs had sued Metuh and others for allegedly forcing themselves into the school premises on February 19, 2011 and assaulting two of the school’s staff, who confiscated Derrick’s mobile telephone.

The plaintiffs, in the suit, marked: FCT/HC/CV/4248/2011 stated that Metuh’s wife and son visited her (Metuh’s wife’s) nephew, Kamsi Aghaji (a student) when an official of the school, Miss. Amauche Igbe, who saw Derrick giving his phone to some students in the boys’ hostel, in violation of school rules (that no phone allowed in hostels) seized the phone.

They further stated that, on being unable to secure the release of her son’s phone, Kanayo invited her husband, who alleged stormed the school premises with armed policemen and allegedly assaulted Pele and Maftau for refusing to release his(Metuh’s) son’s phone.

The plaintiffs prayed the court to declare among others, that the actions of the defendants on February 19, 2011, at the school amounted to trespass and unlawful entry to the plaintiffs’ school premises.

The urged the court to award N500million damages against the defendants (N150m in special and general damages for assault, harassment, intimidation, mental pain, severe humiliation and injury to the person and personal integrity of Pele and Maftau; N100m for exemplary damages for trespass and unlawful entry into the school premises and N250m aggravated damages for grave injury caused to the commercial reputation and protective integrity of the school.

After analysing all evidence led by parties at trial, Justice Ojo resolved the three issues identified for determination against the plaintiffs. She noted that the failed to provide sufficient evidence to prove their case.

On whether the presence of the defendants in the school premises on the day of the incident was unlawful, as claimed by the plaintiffs, the judge noted that the plaintiffs, even though pleaded the school’s newsletter (which they claimed contained notices of students’ relatives’ visiting days) they neglected to tender it in evidence.

Justice Ojo held that the only inference one could draw from plaintiff’s failure to tender the newsletter, which was necessary to prove their claim of trespass, was because its content did not support their case.

“It was a staff of the 1st plaintiff (Miss. Amauche Igbe) that seized the phone from the 2nd defendant and handed over same to the 2nd plaintiff. The saidMiss. Amauche Igbe did not testify in this case and no reason was given for her failure to testify.

“In the face of the denial of the plaintiffs’ case by the defendants, I am of the view that the failure of the plaintiffs to call any other witnesses is fatal to their case. The plaintiffs’ evidence is that other people were present when the assault took place. The people include the staff and students of the school.

“In the present circumstance, I am of the view that the plaintiffs have failed to prove, by the preponderance of evidence that they were assaulted by the defendants on the day in question,” the judge said.

She added that having held that the plaintiffs could not establish trespass against the defendants their prayers for injunctions and damages cannot be granted.