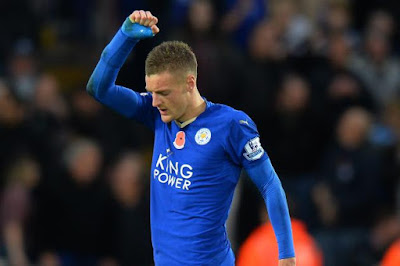 Leonardo Ulloa salvaged a late point for Premier League leaders Leicester City in a game that ended 2-2 against West Ham United after Jamie Vardy was sent off for diving.


Vardy was on target but was dismissed in the second half before Andy Carroll and then Aaron Cresswell made it 2-1, only for Ulloa to net with only seconds remaining.

West Ham went incredibly close to taking an early lead when Kasper Schmeichel pushed Cheikhou Kouyate's header onto the woodwork before the ball rebounded against the other post.

Vardy put Leicester in front with his 22nd Premier League goal of the season, receiving N'Golo Kante's pass and thumping the ball past goalkeeper Adrian.

But Vardy was handed his marching orders in the second half when he received a second yellow card for diving in the penalty area.

The Hammers made their numerical advantage pay when Wes Morgan was penalised for a foul on Winston Reid, and Carroll duly tucked home from the spot.

With four minutes left on the clock, Cresswell unleashed an unstoppable shot that nestled into the top corner.

However, Carroll then gave away a penalty for a foul on Jeffrey Schlupp, and Ulloa duly stepped up to secure a draw that put Leicester eight points clear, with second-placed Tottenham heading to Stoke on Monday.