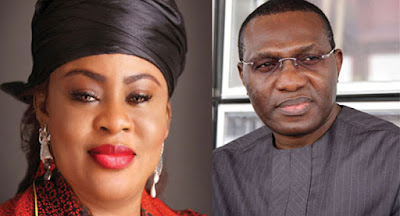 The two remaining embattled senators from Anambra State, Senators Andy Uba and Stella Oduah yesterday made a bold appearance in the National Assembly to disprove assertions of their removal from office.

The two senators who were reported by some media channels to have been removed from office on account of the judicial affirmation of the Ejike Oguebego faction of the Peoples Democratic Party, PDP, also attended their committees’ meetings unhindered.

Their action nonetheless, lawyer to the Oguebego faction, Chris Uche, SAN yesterday, wrote the Independent National Electoral Commission, INEC, asking the body to withdraw the certificates of return issued to Andy Uba and Oduah. Uche in the letter sighted by Vanguard also asked the commission to issue certificates of return to the nominees presented by the Oguebego faction.

Senator Uba, PDP Anambra South attended the meeting of the Senate Joint Committees on Banking, Insurance and other Financial Institutions yesterday while Oduah, PDP, Anambra North was in her office attending to visitors and files on her table.

Their presence at the National Assembly caught the attention of staff and visitors, following news reports at the weekend of their sack from office on account of the Supreme Court judgment on the supremacy battle between the contending factions of the PDP in Anambra State.

Uche stated that the effect of the Supreme Court judgment is that those who were not part of the list of candidates produced by the congress/primary elections under the watch of Oguebego and his executive committee ought and must vacate the positions they occupy at present on the grounds that they were not validly nominated.

The names of Chris Ubah, Annie Okonkwo and 42 others were replaced following the appellate court judgment of 6th February 2015, just before the 2015 general elections.

According to Uche, it is the responsibility of INEC to enforce and comply with the said judgement, saying there was no other primary election conducted by PDP to produce candidates other than the one that produced his clients.

The letter reads in part: “the effect of the Supreme Court judgment consequently is that all those who were not part of the list of candidates produced by the congress/primary elections that the Ejike Oguebego and his executive committee participated in, and monitored by INEC ought and must vacate the positions they presently occupy having not been validly nominated.

“In the light of the foregoing, we therefore demand that your commission complies promptly with the said judgment of the Supreme Court by issuing forthwith Certificates of Returns to our clients as the authentic and legitimate candidates of the Peoples Democratic Party for Anambra state who won the election, the entire gamut of litigation having been exhausted.

“We look forward to your timely cooperation and compliance.”

A panel of the Supreme Court, had last Friday,in Abuja, reaffirmed the earlier Federal High Court’s verdict, declaring the Oguebego-led PDP as the recognised executive in Anambra State.

The Oguebego faction had masterminded the National Assembly primaries which threw up a separate list of National Assembly aspirants as candidates of the party for the election. Among them is Chief Chris Uba the putative leader of the faction, a brother to Senator Andy Uba who had emerged as Senatorial candidate for Anambra South in rivalry to his brother.

The apex court in its judgment on Friday upheld the earlier decision by Justice Chukwu of the Federal High Court that the Oguebego-led faction as the validly elected leadership of the state chapter of the party.

In December 2014, the Federal High Court had ruled that it was only the constitutionally recognized state party leadership led by Ejike Oguebego that could organize the party primaries.