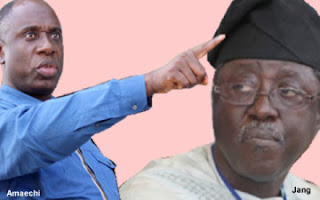 hairman Nigeria’s Governor’s forum, Mr. Rotimi Amaechi, has called the Governor Jonah Jang faction to the meeting of the forum.

A source closed to the Amaechi, who asked not to be named because he was not authorised to speak on the matter, said letters and text messages have been sent to all the 36 state governors urging them to attend.

The meeting will be the second since the forum split into two following disagreement over the May 24, 2013 election during which Amaechi was re-elected chairman after he beat his Plateau State counterpart, Jonah Jang, by 19 votes to 16.

According to the invitation to next week’s meeting obtained by PREMIUM TIMES, the forum which meets at the Rivers State Governors Lodge, Asokoro, Abuja, will discuss the disagreement that trailed its May 24 election, its strategic plan for 2013 – 2015, oil theft in the country, polio eradication initiative and others.

Also, Amaechi, as chairman, the draft agenda for the meeting says, will give a brief opening remarks covering fresh and subsisting litigations, update on Federation Account Allocation committee, FAAC, Excess Crude Account, ECA, and Sovereign Wealth Fund, SWF, update on State Peer Review Mechanism, SPRIM, investment conferences in the US and Russia and other issues.

It was learnt that Amaechi extended the invitation to all the 16 governors in the faction of the Forum led by Jang.

Until last August 31 when he joined other members of the PDP to form the “New” PDP, the Kwara State Governor, Abdulfatah Ahmed was attending the meetings called by the Jang faction.

The Amaechi faction had planned to hold its first meeting two months ago but postponed it following their invitation to a dinner organised by President Goodluck Jonathan at the Presidential Villa.