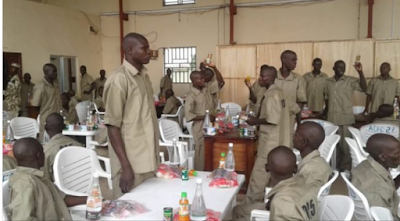 Some residents in Borno state are kicking against the reintegration of repentant Boko Haram members into the communities.

The military had in 2016 launched Operation Safe Corridor, an initiative for the deradicalisation and rehabilitation of ex-Boko Haram members.

The aim of the operation, the military had also said, is to reintegrate repentant Boko Haram members  into society.

In July, 602 ex-Boko Haram members were said to have completed a de-radicalisation, rehabilitation and reintegration (DRR) programme.

But residents who spoke said the idea would be a difficult one to accept.

“From day one, Maiduguri people have never liked the idea of reintegrating the terrorists back to the community,” one of the residents said.

“The reason is simple. It means they are likely to come in contact with people who slaughtered members of their family and friends in their presence and they are expected not to think about it?

“They are expected to agree for these people to be with them in society? How do you expect us to live with the killers of our parents? Those who attacked us and burnt down our houses?”

Shettima Mustapha, another resident who took to Facebook, said one of the ex-Boko Haram members was brought into a community where one of the recently killed humanitarian workers came from.

“Today, we woke up to the news that one notorious Boko Haram member,  popularly known as Mallam Yawu, came back to Shehuri South community. Reportedly, he came back with some papers believed to be government clearance papers, possibly, from those responsible for reintegration of repentant Boko Haram members,” Mustapha wrote.

“The reaction of the people of that community was as expected — a total rejection and condemnation of the authorities who released him back to the community.

“From what we are learning, he is either taken away by security operatives or CJTF, perhaps, looking at the pulse of the general public about his sudden reappearance.

“And don’t forget, only yesterday, a video of the gruesome murder of the humanitarian aid workers was released by the BHT. One of those killed, Abdurahman Bulama, was from the same Shehuri South community where this terrorist is being planned to be reintegrated. The same sad story is true of almost every community in Borno State.”

Usman Alibe, another resident, also narrated how a similar scenario played out in his area in Bama some months back “when a female member of the dreaded group returned home with a full security backing”.

According to him, the insistence of the government on this matter “will not augur well for our fragile peace in the towns and city centre”.

“It is fine if the authorities are so magnanimous to forgive their heinous crime and it is also fine for the victims who they wreak a monumental havoc to not forgive them. Therefore, the government should integrate them into government houses and the villa but not our society,” he said.

TheCable gathered that residents have not been properly briefed and advised on how to accept the reintegration of the repentant insurgents.

“It should be a two-way thing; while these people are being deradicalised, what is being done to the members of the societies who have been the victims? As you are working on the terrorists, you also work on those affected,” Jack Vince, a journalist resident in Maiduguri, told TheCable.

He added that going forward, a bigger problem might be brewing if the people are not properly sensitised on the matter.

In February, some soldiers at the war front expressed disappointment over the release of repentant Boko Haram suspects.

Meanwhile, Sagir Musa, army spokesperson, is yet to respond to a message seeking reaction over the development.