Stop questioning me on a case not before the court, ex-NNPC GMD tackles EFCC 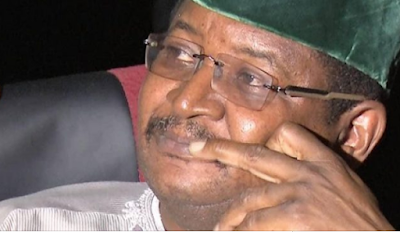 Andrew Yakubu, a former group managing director of the Nigerian National Petroleum Corporation (NNPC), has told the Economic and Financial Crimes Commission (EFCC) that it cannot cross-examine him based on a case that is before another court.

At the commencement of proceedings on Wednesday, Ahmed Raji, Yakubu’s lawyer, raised an objection when Mohammed Abubakar, EFCC’s counsel, tried to cross-examine his client based on evidence marked Exhibit J.

According to Raji, Exhibit J is irrelevant to the case before the court.

The exhibit borders on a case instituted against Yakubu before Nnamdi Dimgba, a judge of the federal high court, in 2016.

According to NAN, the case, which is still ongoing involves Atlantic Energy Brass Development Ltd, an oil company, and in which Yakubu was initially the 7th defendant.

He was later dropped as a defendant to become the first prosecution witness in the matter bordering on illegal lifting of crude oil.

However, the prosecution counsel insisted that the exhibit is relevant to the case.

“It is very clear that the exhibit is relevant to counts three and four. We further submit that the same Exhibit J is also relevant to some matters which DW1 (Yakubu) has testified about both in evidence-in-chief and under cross-examination,” Abubakar said.

“We, therefore, rely on the provision of Section 7 paragraph a, b, c, d and e in submitting that Exhibit J is relevant.

“It is our further humble submission that Exhibit J is relevant in proving whether or not there has been a predicate offence to counts three and four.”

Abubakar also noted that the supreme court is yet to decide whether or not the former NNPC GMD will answer to the remaining four-count charges struck out by the court of appeal.

“However, since the supreme court is yet to decide this issue, one way or the other, we submit that they cannot forgo our right in disproving that fact,” he said.

He staid Exhibit J would help them establish that the accused obtained large sums of money he cannot account for.

He said in the whole 56 pages of the lead judgment, and the respective two more pages of the contributory judgments, the court of appeal did not say Exhibit J was not relevant to counts three and four.

“We urge you to discountenance the objection raised by the defendant and allow us to continue our cross-examination of DW1 on the context of Exhibit J.”

Responding, Raji said the judgment of the court of appeal did not say that counts three and four had anything to do with Yakubu’s source of money which shows that the exhibit is “totally irrelevant and anti-court of appeal judgment.”

“I urgent my lord to sustain our objection,” he said.

Ahmed Mohammed, the judge, has adjourned the matter till October 15 for ruling and continuation of trial.