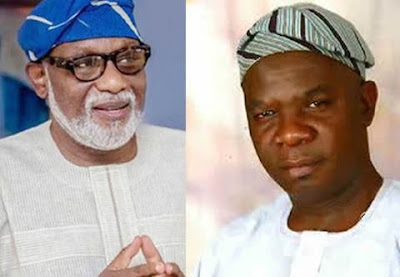 Governor Rotimi Akeredolu of Ondo State has described the exit of his deputy, Agboola Ajayi from the All Progressives Congress, as good “riddance to bad rubbish”.

The governor, who said this in an interview with newsmen at the National Secretariat of the APC, in Abuja, on Monday, also vowed to beat the Peoples Democratic Party in his deputy’s local government area in the October 10 governorship election in the state.

Akeredolu recently won the All Progressives Congress governorship ticket for reelection while his deputy, Agboola Ajayi, a PDP governorship aspirant lost to Eyitayo Jegede who has been declared the PDP flagbearer for the election.

While responding to a question on the decision of his deputy to leave the APC to join the PDP, Akeredolu said, “For me, the deputy leaving the APC to return to the PDP is good radiance to bad rubbish.


“We thought we could accommodate him at the APC but since he returned to where he truly belongs, it is all well and good. I always wish people the best I can.

“From what I have been told, he has lost the ticket and I pray he won’t jump to another place but if he does, all well and good.

“However, for his own sake and as a big brother, I will advise him to stay with Jegede, support him very well.

“He has made a case that he helped me to win, let him help him to win and we will confirm that he is popular. What I know is that he is of no importance, he has no hold on any local government. I can assure you that come during the election, I will defeat him in his local government and he will never recover from it.”