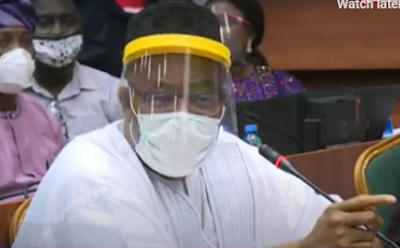 The Minister of Niger Delta Affairs, Senator Godswill Akpabio, on Monday, accused the House of Representatives Committee investigating financial mismanagement in the Niger Delta Development Commission, of bullying him.

The House is presently grilling Akpabio as the supervising minister of the NDDC.

The investigative hearing is being held at the Conference Room 231 of the House.

Earlier, the acting Managing Director of NDDC, Prof Kemebradikumo Pondei, had collapsed while being grilled by the lawmakers.


But when the hearing resumed, the committee Chairman, Olubunmi Tunji-Ojo, asked the minister if the three major projects he had carried out had the approval of the Federal Executive Council.

Akpabio, who was interrupted while answering the question, said, “Mr Chairman, the condition, where we are in now, does not require bullying, with due respect.”

However, Tunji-Ojo responded, “We are not bullying you, honourable minister. Answer the question directly. You know you are my leader. An uncommon leader.”