Magu became a law unto himself, says Ex-DSS director 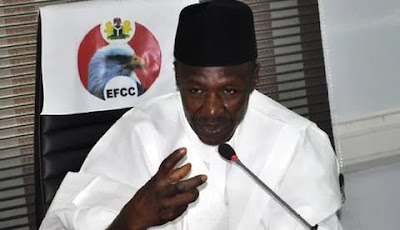 A former Assistant Director with the Department of State Services, Dennis Amachree, says the acting Chairman of the Economic and Financial Crimes Commission, Ibrahim Magu, became a law unto himself and refused to submit to constituted authority.

He said the Attorney-General of the Federation remained the supervising authority over the EFCC just as the Department of Justice oversees the activities of the Federal Bureau of Investigation in the United States.

The former DSS official said Magu should not have been engaged in a battle with the AGF, Abubakar Malami (SAN).

He said it wasn’t the DSS that arrested Magu but policemen attached to the Force Criminal Investigation and Intelligence Department.


Amachree said, “I think Magu has some blame on his side. Apparently, he was operating as a law unto himself. He must be reporting to somebody. Even in the US, the FBI reports to the Department of Justice. In Nigeria, EFCC ought to report to the AGF who is now the originator of the allegations.

“When this thing came up, they knew he may not want to come, I don’t know, but he was stopped on the way to another meeting but they said he must go before the panel. He was accosted by policemen from the FCID.

“However, because they were policemen in plain clothes, many people thought it was the DSS.”

Magu has been in police detention since Monday responding to about 24 allegations.

He is set to face a Presidential panel again today to answer more questions.