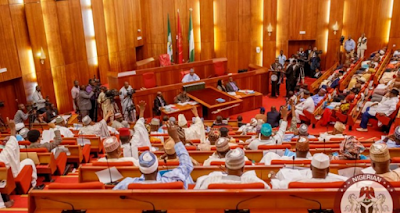 The Coalition Against Terrorism and Extremism (CATE) has faulted the Tuesday’s call by the National Assembly for the sack or resignation of the Service Chiefs.

The Senators made the call during plenary on Tuesday in reaction to a motion by Senator Ali Ndume.

Senator Ndume moved his motion as a result of the recent ambush of soldiers in Katsina and the alleged voluntary resignation of many soldiers.

Reacting to the call, President Muhammadu Buhari in a statement by his spokesman, Garba Shehu said it is only the President that can sack Service Chiefs and no one else.

However, CATE said the Senate erred by making such a call at this critical time when the Nigerian troops are sweating it out on the battlefield to clear the remnants of terrorists from the shores of the nation.

Gabriel Onoja, National Coordinator of the group said the Senate has never shown commitment to support the efforts of the military leaders and President Buhari in fighting terrorism and other crimes in the country.

The statement reads. “The Coalition Against Terrorism (CATE) is totally disappointed with the decision by the Senate of the Federal Republic of Nigeria to side with terrorists and bandits with its call on the Service Chiefs of the Armed Forces of Nigeria to resign. The Senate erred in this misguided resolution just as it has been erring in the performance of its duties.

“Our disappointment is not in any way mitigated by the knowledge that the lawmakers have a history of pursuing agenda that are at variance with the yearnings of the constituents and that the oversight powers bestowed on them by the Constitution has consistently been abused in pursuit of lining their individual pockets.

“It nonetheless appalling that the Senate did not even avail itself the face-saving measure of shopping for a unicorn by having a credible member of the Red Chamber to move the motion on something as important but relied on Senator Ali Ndume, representing Borno south and chairman of the committee on army, who has not satisfactorily proven that he is not part of Nigeria’s Boko Haram problem.

“The lawmakers worsened the situation by adopting resolutions whose import they understand even less than they understood the dynamics fueling Nigeria’s security breaches and the efforts that military leaders under President Muhammadu Buhari have made to curtail them.

“They have by their cavalier attitude sent the message to terrorists, bandits and criminals that they have the support of the Senate against the gallant officers and men that have been toiling to defeat terrorism and stamp out insecurity. They have also told the enemies of Nigeria that they have the approval stamp of the National Assembly.

“The Senate has never shown commitment to support the efforts of these military leaders and President Buhari in fighting terrorism and other crimes in the country. This latest outing by the Senate is a clear indication that whilst the President and the Service Chiefs are working day and night to address the insecurity in its multiple facets, the Senate prefers to play politics with the lives of the citizens.

“The lawmakers failed woefully in crafting and amending anti-terrorism legislation that has been sorely needed to defeat terrorism, which consequently left the military to be overstretched and compelled to fight the terrorist with only strategy and military might. We are therefore wondering when the Senators will resign their positions for having failed to exert international pressure on countries that have been fueling terrorism in and around Nigeria by covertly funding and supporting Boko Haram.

“We demand to know when the Senators will resign for sabotaging the anti-terrorism efforts through delayed budget consideration and approval, distracting the Armed Forces with pointless inquisitions that are in reality bare faced attempt to extort those invited to appear. They should accept responsibility for keeping the country’s teeming youth in deprivation and poverty that are the main drivers of the insecurity in the land rather than trying to offload the blame for the problems in the land on principled men that cleaning the mess created by the likes of the politicians in parliament.

“CATE calls on the Service Chiefs to disregard the drama from the Senate and focus on carrying out the assignment given to them by President Buhari.”