How Amaechi mocked me when I succeeded him – Wike 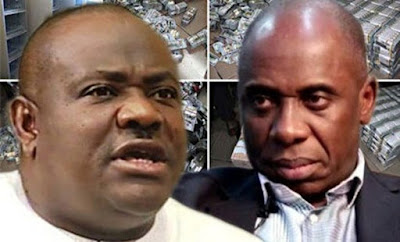 Rivers State Governor, Nyesom Wike, has recalled how his predecessor, Rotimi Amaechi, mocked him while running to contest the 2015 governorship election in the state.

Wike recalled how Amaechi, now Minister of Transportation, boasted that there would not be money anywhere for him to pay salary and to provide infrastructure.

The Governor of Rivers State said this while speaking with newsmen after the inspection of the ongoing shore protection work at the sandfilled land at Eastern Bypass, Port Harcourt,

The governor said he had surpassed his challenges and the people have not been left disappointed, adding that it is amazing to have recovered such land that once served as a hideout for criminals.

The governor also said the last five years of his administration has been remarkably successful because of the help of God.

According to Wike, “Each day I wake up I get surprised about the things that we have achieved. In May 29, 2015 when I came in, the former governor said that there was no going to be money anywhere to pay salaries and not to talk about providing infrastructure. It is amazing, people wonder where we are getting money from.”