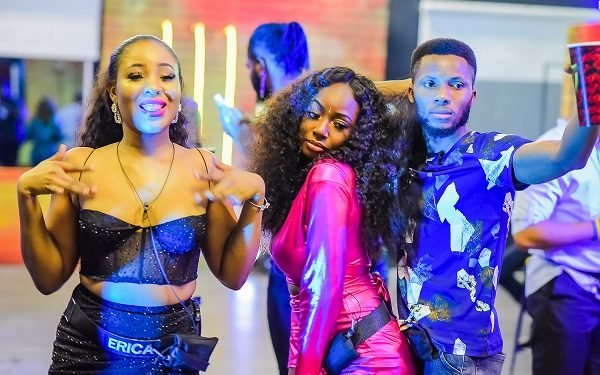 After a long, one week wait, the highly -anticipated Saturday night party of #BBNaija Lockdown edition has come and gone but not with juicy gists and memories.

Here are five of the juicy gists from the party.

1. Bright O is not a pastor, he is a party animal

With several religious related memes on the internet of Bright O, who would have thought that after all that preaching and those deep intellectual thoughts, Bright O could become the wildest party animal at the party?

In the middle of the dance, he stopped abruptly and wore his shirt again as quickly as he took it off.

2. Neo is a groove master

Neo is one of the Housemates that couldn’t hide his joy and love for a good groove. With  DJ Sarz hitting the Housemates with good vibes and jams, Neo threw away caution to enjoy the best of the night.

The sheer madness of the moves Neo considers to be dancing on the party is a memory that will linger on for many editions of BBNaija yet to come.

From his ground thrusts to side twerks, Neo’s rhythmic gyrations are anything but conventional and utterly unforgettable.


3. Erica, Kiddwaya and the party

It is unsure why but Erica made Kiddwaya look unserious on the dance floor. Kiddwaya attempted unsuccessfully to make a play for Erica but he failed spectacularly.

However, Kiddwaya’s affections were sought after by TolaniBaj who kissed him as they danced slowly but this only scared him away for the rest of the night.

Some viewers felt it was disrespectful while others thought it was a regular part of the courting process. After the party, the couple spent the rest of the evening in the kitchen wrapped around each other before falling asleep on the same bed.

It’s without a doubt that Eric and Lilo are into each other. Aside from forming the earliest ship – relationship – in the house, the pair had the party to thank for totally unwinding without hindrance.

Just as Eric couldn’t get enough of Lilo at the party and on the dance floor, Lilo was left breathless with the moves and signals from Eric. The two retired to bed early and didn’t catch much of the after- party drama.

5. Nengi ends rivalry with Erica on the dance floor

Nengi and Erica seem to have buried the hatchet on the dance floor after what seemed like a love triangle involving Ozo.

Nengi and Erica grew to appreciate each other because of their mutual twerking talent.

This led to a conversation after the party that completely changed the dynamic of their previous understanding and cemented a new concrete bond between the lovely ladies.

The pair used the quiet time after the party to affirm their mutual respect and assured one another that there is no jealousy or malice between them.