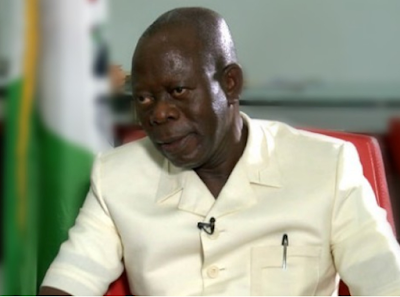 The running mate to Governor Godwin Obaseki in Edo state and incumbent Deputy Governor, Philip Shaibu, has mocked the former National Chairman of the All Progressives Congress (APC), Adams Oshiomhole, after he knelt to beg some traditional rulers for forgiveness.

Oshiomhole on Sunday night in Benin City, begged for forgiveness for selling Obaseki to the people of the state in 2016 and promised to right his wrongs during the forthcoming Edo governorship election.

According to Shaibu, no amount of stunts like that will prevent APC’s candidate, Osagie Ize-Iyamu, from defeat.

He stated this during a campaign that started from Akpakpava Road in Benin City, through Ekpoma to Jattu, in the Etsako West Local Government Area of the state.

“No amount of kneeling stunt will save the former national chairman of the APC, Adams Oshiomhole, and his candidate, Osagie Ize-Iyamu, from defeat,” Shaibu said.

The Deputy Governor also claimed that he scheduled several peace meetings with Oshiomhole without success, before the former APC National Chairman masterminded their disqualification from contesting in the primaries.