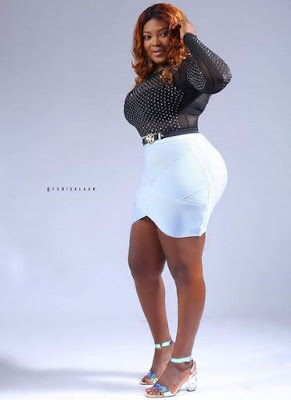 Beautiful Yoruba actress, Temitope Abosede Adedapo has taken a subtle swipe at women who go as far as being unclad to show they are s3xy. In a chat with Potpourri, Temitope said she believes a woman should flaunt her God-given endowment but not to the extent of showing off her “birthday suit” or most of it.

“Being s3xy doesn’t mean you have to go naked. Yes, I agree a woman has to look good and show off but not to the extent of going naked to prove she is s3xy. You can flaunt your endowment without showing so much of bare skin. I love to flaunt my endowment but I can never be seen showing too much skin to appear as if I’m naked,” she said.

Temitope started acting in 2007/2008 with a group known as Neehas Production but left the industry in 2013 to seek greener pasture abroad. She came back in 2019 and pretty much had to begin again where she left off.

“Leaving the industry for so many years is a big challenge for me because I have to start again from the beginning, that is not an easy one for me,” she said.


She’s not exactly a greenhorn in the industry, she has produced two films of her own, namely; “Ero Okan Mi” in 2010 and “Ibaje” in 2019. She has also featured in many films like Figurine, Baba Adugbo, Oko Olosho, Meje Meje, Legal wife and many others. She holds a Bsc degree in Philosophy from the University of Lagos.