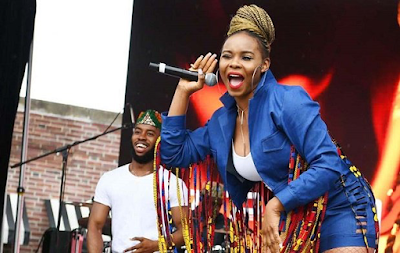 Nigerian artiste, Yemi Alade has been listed among the musicians across the world to perform at the ‘Global Goal: Unite For Our Future – The Concert’.

The globally televised and live-streamed special is staged by Global Citizen and the European Commission as part of their commitments to the fight against COVID-19.

Dwayne ‘The Rock’ Johnson is expected to host the show on June 27, which is aimed at raising billions of dollars in private and public donations to help lessen the impact of the pandemic on those living in extreme poverty and communities facing discrimination.

Global Citizen and the European Commission on Monday announced Global Goal: Unite for Our Future – The Concert, with the aim of ensuring that no one is left behind in the global fight to tackle COVID-19,” read a statement by the organisers.


“The concert, which will premiere on Saturday, June 27, is a globally televised and digitally streamed special that will highlight the disproportionate impact COVID-19 has on marginalized communities — including people of color, those living in extreme poverty, and other communities facing discrimination.

Alade has also taken to her Twitter page to confirm her participation in the event, stating that it was “time to fight for the world we want”.

The show is also geared towards encouraging the governments, private sector and philanthropists to make commitments to more equally distributed COVID-19 tests and vaccines.