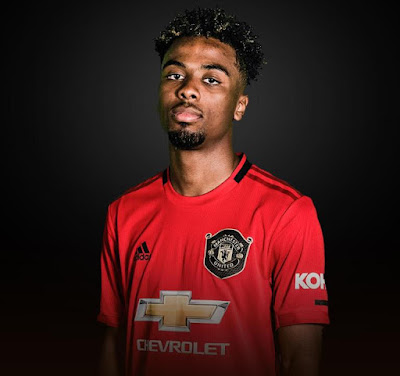 Manchester United midfielder, Angel Gomes, has reacted to a2016 video that surfaced on social media when he visited Prophet T. B. Joshua’s Synagogue Church of All Nations (SCOAN), saying he was just practising his faith.

The footballer, in the viral video, identified himself as a 16-year-old whose parents are “huge fans” of Joshua.

The Englishman narrated how frequent injuries — including hip, groin and ankle — hindered him from playing in times of important tournaments, matches, and breakthrough moments.
He said before the congregation: “My name is Angel Gomes, I’m from Manchester. I’m 16. I play for the Manchester United Football Club. And I’ve been struggling really with injuries.

“I’ve been having injuries around my hip and groin which have been affecting me playing. I also suffered ankle injury not long ago which kept me out for a long time.

“I play for Man United, I also represent England national team under-17 level as captain. I’ve known about the Synagogue Church of Nations for a long time.

“As my family follows the prophet, my parents are big fans. So we thought it would be a good time for me to come and be touched by the prophet.”

Reacting to a two-minute video, Gomes wrote on Twitter that he was young at the time and only did what his parents thought was best for him.

He wrote: “Regarding the video that has come out from 2016. I am from a Christian family at the time my mum was a fan of the pastor, and she really wanted me to go. I was going through some issues. From the outside looking in it looks crazy, but I was just practicing my faith.

“I didn’t really need to explain myself but a lot of people was (sic) asking me what the video was about. I was young at the time and if my parents thought something was best for me I would do it. There are far more important issues out there in the world we can tackle. For example #FreeSchoolMeals #maketheUturn!!!!!”


I didn’t really need to explain myself but a lot of people was asking me what the video was about. I was young at the time and if my parents thought something was best for Me I would do it. There are far more important issues out there in the world we can tackle.
— Santi Gomes (@agomes_47) June 16, 2020

Gomes is the youngest player to represent Manchester United since Duncan Edwards, who died at 21, in 1953.

After being touched by Joshua, the wonder kid said he felt a ‘little shock’.

“I can really describe how I felt. Just don’t doubt what you feel on the inside. Go with your heart. When you need someone to look up to, just look to God and have faith,” he said.