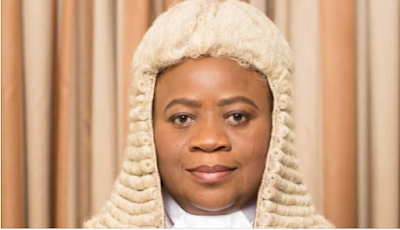 Garba Shehu, presidential spokesman, says President Muhammadu Buhari has not appointed Monica Dongban-Mensem as the substantive president of the court of appeal because the relevant security agencies are not done screening her.

Dongban-Mensem has been acting as head of the appellate court since the retirement of Zainab Bulkachuwa in March.

Although the National Judicial Council (NJC) recommended her as the substantive head of the court, Buhari did not send her name to the senate for confirmation.

Instead, the president recently extended her tenure as acting president of the court till September.


Sources had disclosed that dirt-digging is being employed by some presidential advisers to get Dongban-Mensem disqualified and pave the way for Mohammed Lawal Garba, judge who chaired the 2019 presidential election petitions tribunal that ruled in favour of Buhari.

A source said her national youth service record is being scrutinised

In his statement, Shehu did not directly say that the NYSC record of Dongban-Mensem is being checked but he made reference to Kemi Adeosun who stepped down as minister of finance over alleged forgery of NYSC exemption certificate.

Shehu said Buhari ensures that all appointments meet the requirements of the constitution.

“The president has a duty to ensure that all such appointments meet the requirements of the constitution and protecting the supreme law of the land in this regard, he has an obligation to allow law enforcement and security agencies to do their work,” he said.

“Don’t forget our recent experience with ministers who were signed off upon and turned out as having not undertaken the compulsory National Youth Service, just to give you an example.

“In the specific case of the acting president of the Court of Appeal, Her Lordship Justice M. S Dongban-Mensem, the statutory regulatory time of her acting period has not lapsed. This is not about ethnicity or religion. It is about security and law enforcement agencies being allowed to complete their work.

“Nobody should seek to stampede the President in carrying out his constitutional duty in this respect.

“The president had not been a rubber stamp dealing with these matters before, and is not prepared to be one at this time. Let all allow the system to do what is right.”