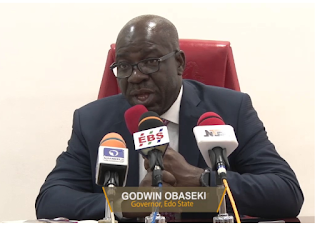 The Peoples Democratic Party (PDP) has said it is ready to welcome the Governor of Edo state, Godwin Obaseki, if he decides to decamp following his disqualification from the forthcoming governorship primaries of the All Progressives Congress.

PDP’s National Publicity Secretary of the PDP, Kola Ologbondiyan, stated this according to The Nation.

When asked if the opposition party would admit Obaseki into its fold, Ologbondiyan replied: “Yes, we will accept him of course.”

He however insisted that no discussions have taken place between PDP and the Governor.


Ologbondiyan also made it clear that Obaseki will not be handed an automatic ticket if he joins.

“Joining a party is different from contesting election. These are two separate things.

“People join political parties from their wards. We are in touch with our Edo State chapter and they have not told us that the governor had joined our party,” the PDP spokesperson added.

Earlier on Friday, the All Progressives Congress (APC) disqualified Obaseki, from contesting in its primary on June 22.