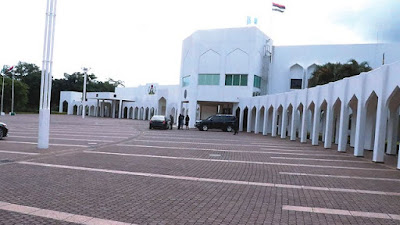 The shooting at the Presidential Villa involving Usman Shugaba,  the Aide-de-Camp to the First Lady, Mrs Aisha Buhari, and other security agents attached to her will top the agenda of the police management team meeting today (Monday).

The First Lady’s security aides would face a panel that would be set up by the leadership of the police.

It was also learnt the affected security aides would not be restored to the wife of the President following their involvement in an altercation with a personal assistant and nephew of the President, Sabiu Yusuf, also known as Tunde, last Thursday, at the Presidential Villa.

The trouble started on Thursday night, when the President’s wife and three of her children – Zahra, Halima and Yusuf – as well as some of her security aides, led by Shugaba, stormed the residence of Yusuf at House 8 by the Pilot Gate of the Presidential Villa.


They insisted that Yusuf, who had just returned from Lagos, should proceed on self-isolation for 14 days, to save the President and his family from the danger of COVID-19.

Yusuf had visited his wife, who was recently delivered of a baby in Lagos.

The situation worsened when the First Lady’s ADC, in his attempt to apprehend Yusuf allegedly released some gunshots on the premises.

Following the gunshots, Yusuf ran away and took refuge in the nearby house of his uncle, Mamman Daura, also Buhari’s nephew.

The IGP, a report further stated, after receiving security report at the Presidential Villa, ordered the arrest of the ADC to the First Lady and other security aides, who accompanied her to Yusuf’s residence.

Besides the ADC, a chief superintendent of police, others arrested were the escort commander, Deputy Superintendent of Police, Sheriff Kazeem, who is the son of ex-IG, Hafiz Ringim, and four riot policemen who were at the scene of the incident. The operatives are being held since Friday morning.

One of our correspondents learnt on Sunday that the shooting incident would top the agenda at the weekly meeting of the police management team which would be presided over by the IG at the force headquarters, Abuja, today (Monday).

A source in the Presidency who confided in the Punch, said, “Shooting at the State House is not permitted under any guise.  It is a serious security breach that should not have happened. And that is why the IG ordered the detention of the officers involved. The men will face a police panel and if found culpable, may be demoted and redeployed from the Presidential Villa.”

Explaining the incident further, the source stated,  “The ADC, Shugaba, fired gunshots in the air after Yusuf jumped a locked gate in a bid to escape. Yusuf narrated the incident to Daura who informed Mr President; the President was very furious and he complained to the IG.”

“The truth is that the officers can’t go back to the villa. If they did not lose their ranks, they would be redeployed to other formations; this kind of incident attracts demotion and serious reprimand,” an official noted.

The Force Public Relations Officer, DCP Frank Mba, could not be reached for comments as he did not respond to calls. He had yet to reply an SMS as of the time of filing this report.

One of our correspondents further gathered that Shugaba started working with the First Lady about three months ago.

Findings indicated that Shugaba was the Chief Security Officer to the Kogi State Governor, Yahaya Bello, before he was redeployed to the Villa as ADC to Aisha.

It was gathered that Shugaba had denied firing the shots, insisting that the shooting was done by a DSS official.