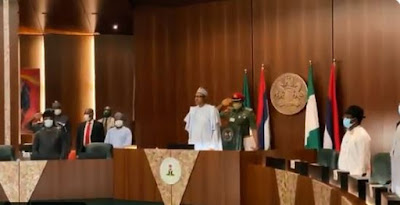 President Muhammadu Buhari and other leaders of the All Progressives Congress (APC) from across the country, are gathered at the State House for the party’s National Executive Council (NEC) meeting.

As at noon, the Executive Council Chambers of the State House had been packed with attendees for the NEC, which was called by factional Acting National Chairman of the party, Chief Victor Giadom.

The attendees include Governors, National Assembly leaders, as well as some national and state party executive members.


The National Executive Committee (NEC) of the ruling party, the APC has just commenced at the State House, Abuja. President Buhari, VP Osinbajo, Governors and members of the National Working Committee (NWC) of the Party and other members of the NEC are in attendance. pic.twitter.com/jQyk1TGqd0
— Bashir Ahmad (@BashirAhmaad) June 25, 2020

President Buhari had, on Wednesday, confirmed that he will be attending the National Executive Council meeting of the party called by a man who in the reckoning of the Majority of National Working Committee members no longer has a locus standi in the party as he has been suspended and his position in the NWC filled up.

President Buhari, however, stated that “the law is on the side of Victor Giadom as Acting National Chairman.”