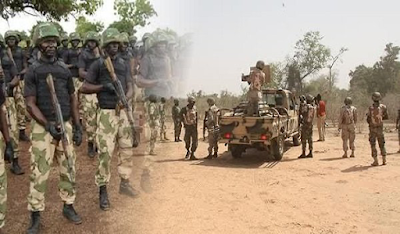 Air Task Force (ATF) of Operation Lafiya Dole also launched airstrikes on terrorists’ locations at Bula Bello and Ngoske on the fringes of the Sambisa Forest in Borno, the Defence Headquarters said yesterday.

It said troops conducted precision airstrikes on bandits’ hideouts at Munhaye and Keta in Tsafe LGAs of Zamfara.


Enenche said the camp was destroyed, the News Agency of Nigeria (NAN) reports.

According to him, troops deployed at Tunga also arrested two suspects who were linked to the kidnap of a local teacher in Foga LGA.

He added that one locally made rifle was found in their possession, adding that the suspects had been handed over to the police in Awe for investigation.

“The Defence Headquarters commend the troops for their offensive actions against the bandits and other criminal elements in their area of operation,” he said.

He said the successes were as a result of subsidiary Operation Long Reach being conducted in the push to end the activities of the terrorists in the Northeast.

He said the air interdiction missions were executed on June 18 and June 19 sequel to credible intelligence reports that revealed the presence of the terrorists in the area.

According to him, the terrorists used the closely linked settlements as staging points to launch attacks against friendly forces’ locations and surrounding civilian settlements.

“The Chief of the Air Staff, Air Marshal Sadique Abubakar, commends the ATF for their dedication and professionalism.

“The Defence Headquarters equally urges them to intensify the air offensive against the terrorists and all other criminal elements threatening the peace and security of our beloved country,” he said.

The Coordinator said the troops of Operation Hadarin Daji recorded successes in the Northwest theatre of operations to curtail the activities of bandits in Katsina and neighbouring states.

He said troops yesterday killed several of them in an encounter, and are in pursuit of the fleeing bandits.

According to him, the troops destroyed five major bandits’ camps and recovered four empty magazines, five motorcycles, one bandolier and two pairs of military uniforms, among others.

“Furthermore, six kidnap victims were rescued by troops while 21 suspected bandits’ collaborators were arrested during the operation.

“Troops recovered one dane gun and four mobile phones, amongst other items,” he said.

He said the gunships recorded accurate hits on the bandits’ locations, killing scores of bandits in the process while others fled into the surrounding bush.

According to him, the ground troops in blocking position equally engaged the bandits, inflicting further casualty while several suspected rustled livestock were recovered from the surrounding area.

“The animals were subsequently handed over to appropriate quarters for identification and hand over to their owners.

“The Military High Command congratulates the troops for this notable feat and urges them to remain committed and sustain the onslaught against the criminals,” he said.

Special Adviser to Zamfara Governor Bello Matawalle on Public Enlightenment, Media and Communications, Mr Zailani Bappa, said the state would use the carrot and stick approach in tackling banditry.

“Those who refuse to accept the peace process and those who renege on it are being faced with the wrath of the state’s ‘Operation Hadarin Daji’.

“We must not forget the successes recorded in the last few months including the rescue of 12 abducted persons, which included the District Head of Wuya, the killing of nine bandits and arrest of 12 others.

“Moreover, a large number of bandits were killed in an air raid on Tungar-Duba road, where six kidnapped persons were rescued from the fleeing bandits, while over 200 bandits in Zurmi council area were also neutralised recently.”

“The governor, who is under oath to protect the lives and property of the people of the state, will not relent until peace is fully achieved in Zamfara State,” he said, according to NAN.