This is the end of ‘State of Osun’ as we know it, court rules 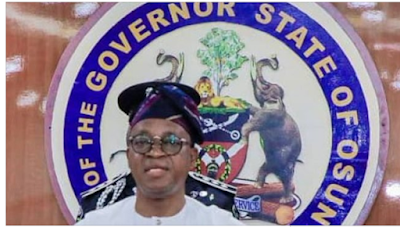 Rauf Aregbesola, as governor, renamed Osun state as “State of Osun” in 2011 — as part of his campaign for the “restructuring” of Nigeria and “true federalism”.

He had copied the style of American states which are referred to, for instance, as “state of New York” rather than “New York state”.

Not so fast, the Osun state high court sitting in Osogbo, the state capital, has ruled.

Mathias Agboola, the judge, on Wednesday, held that it is unconstitutional to rename Osun state as the “state of Osun” — declaring it as mere “artistic coloration”.

Kanmi Ajibola, a lawyer in the state, had instituted a suit against the state government over the levy of a personal tax of N5.3 million imposed on him by the state Internal Revenue Service (IRS).

Ajibola contended that the levy was illegal because the law upon which the tax was issued was made by “The House of Assembly of State of Osun”.

He described the tax demanded as “indictive, punitive and speculative” because he usually held opposing views to those of Aregbesola.

The official handle of the state government, @stateofosun, tweeted the judgment on Thursday.

M. Popoola, the state counsel, had urged the court to strike out the case for lack of jurisdiction.

He said Ajibola did not seek all necessary means of settlement before approaching the court.

Delivering judgement, Agboola upheld the submissions of the applicant that the “State of Osun” is unconstitutional.

He warned lawyers to be wary of the legal implications of referring to Osun State as “State of Osun”.

However, the judge upheld the submission of the defence that Ajibola should have sought other means of settlement provided by the tax law before filing a suit before the court.

Ajibola had filed a similar case in 2017 and the Osun state high court sitting in Ilesa had declared that the renaming of Osun state as “State of Osun” by Aregbesola was illegal and therefore, null and void.

Yinka Afolabi, the judge, ruled that “the law and its makers were unknown to the 1999 constitution”.