Teenage boy swept away by flood buried near Surulere canal 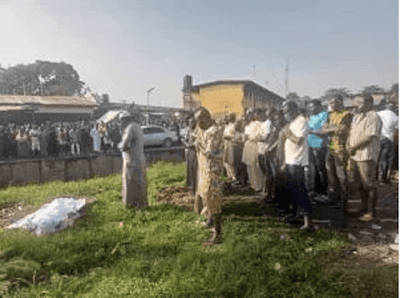 The Lagos State Emergency Management Agency (LASEMA), says the remains of the 19-year-old teenager who was swept away by flood on June 22, near Surulere Low-Cost Housing Estate has been recovered and buried beside the Canal at Onilegogoro.

LASEMA Director-General, Dr Olufemi Oke-Osanyintolu, made the disclosure in an interview with the News Agency of Nigeria (NAN) in Lagos on Wednesday.

He said the 19-year-old girl, simply identified as Ayisat was on June 22, reportedly swept away by a strong flood around 12 p.m. at Alapafuja axis, Surulere Low-Cost Housing Estate, following torrential rainfall in the state.

Oke-Osanyintolu said that LASEMA Response Team (LRT) and community members searched for her body through the adjoining canals on June 22 to no avail.


He, however, said that her dead body was later found at Onilegogoro canal in Surulere around 8:30 a.m, on June 23.

”She was buried by the community members beside the canal at Onilegogoro in Surulere,” he said.