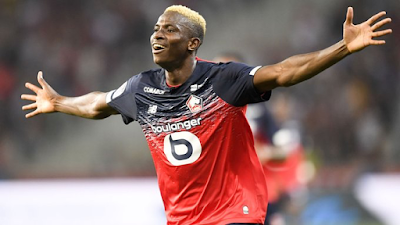 Victor Osimhen has been announced as Lille’s Player of the Season, following his eye-catching displays for the French side in the 2019-20 campaign.

The Super Eagles striker joined the Great Danes last summer from Sporting Charleroi after his impressive performances for the Belgian side, where he scored 19 league goals before his departure.

The 21-year-old striker was recruited as a direct replacement for Ivory Coast international Nicolas Pepe, who teamed up with Premier League giants Arsenal.


Osimhen scored 18 goals and provided six assists in 38 appearances across all competitions and his 13 strikes in Ligue 1 was the fourth highest in the division.