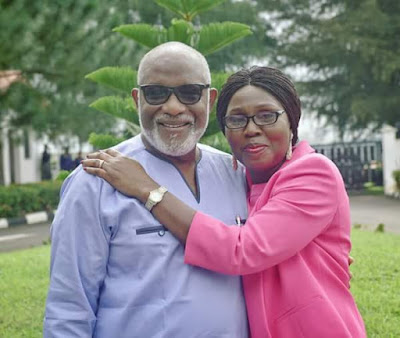 The Governor of Ondo State, Oluwarotimi Akeredolu, on Monday backed the move by a social critic to sue his wife, Betty Akeredolu for alleged defamation.

The governor, while reacting to a letter being circulated on social media and addressed to his wife over a planned legal action following the First Lady’s altercation with a social critic and political commentator, Jimmy Adekanle, said that his wife does not enjoy immunity, hence the lawyer should proceed with his client’s request.

Last week, the governor’s wife, Betty Anyanwu-Akeredolu had in a social media post called the social critic who is based in Canada a rapist.

The post by the First Lady was sequel to a post made by Adekanle who is popularly known as ‘JAF’ alleging that the First Lady broke the federal government’s inter-state travel ban when she travelled to Ondo State from Imo State amid the COVID-19 pandemic.

Responding in a post, the First Lady said, “Jimmy Adekanle Jaf shut the hell up. You are still talking. Canada lresivist. This has entered in Ondo social media lexicon. I even heard that you are a sex offender and you ran away to Canada. Shame on you! Come back. Police is waiting for you. And my office is after scumbags like you. You are in real trouble. Arabinrin has no mercy for rapists like you. Jail term awaits you. FAKE HUMAN IRESIVIST… ”

While demanding a retraction and withdrawal of the alleged defamatory post within a stipulated seven-day period, the social critic’s lawyer, Tolu Babaleye said that “a profound and unreserved apology” must be tendered to his client for the psychological and social effect the post had cost him.

Stressing that the apology must be published, Babaleye stated in the letter that his client will be left with no option than to approach the court for redress if the First Lady failed to do the needful.

Meanwhile, reacting to the development, Governor Akeredolu in a social media post told the lawyer to go ahead with his client’s request.

The post reads, “Tolu Babaleye, please go ahead with your client’s further instructions and file the action. The First Lady does not enjoy immunity,” the governor said.