Student files N1b lawsuit against army over ‘shooting, amputation of his leg’ 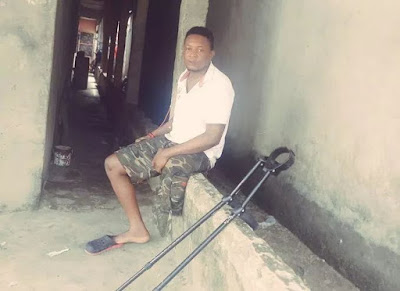 Emmanuel Madubuezi, a Nigerian student, has filed N1 billion lawsuit against the army after a soldier allegedly shot him resulting in the amputation of his leg.

On September 14, 2017, gunshots fired by the officer had hit Madubuezi, who was seated in a tricycle on his way to Port Harcourt Polytechnic, where he was studying at the time.

The bullet had pierced through his left leg and hit an elderly woman seated next to him.

In the suit filed by Tope Akinyode, his lawyer, before the federal high court, Port Harcourt, Madubuezi is seeking a redress over alleged violating of his human rights.

Other defendants in the suit are the chief of army staff, the attorney-general of the federation and Bet9ja, a betting company.

In the case with suit number: FHC/PH/FHR/118/2020, the applicant is asking the court to declare that the gunshots which was fired on his client and the amputation of his client’s leg contravenes his fundamental human right to life, human dignity and freedom of movement.

According to Akinyode, who is also the national president of revolutionary lawyers’ forum, the court has not assigned a date for the suit, as of Thursday.

The development comes weeks after the lawyer threatened to sue the army for ‘neglecting’ Madubuezi after the incident.