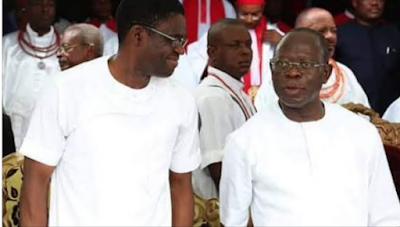 Philip Shaibu, deputy governor of Edo, has accused Adams Oshiomhole, chairman of the All Progressives Congress (APC), of trying to take control of the state, ahead of the party’s governorship primary.

The state chapter of the APC had opted for indirect primary, but a faction of the party loyal to Oshiomhole pushed for direct primary.

Although there are six aspirants seeking the APC ticket for the September election, the race is between Godwin Obaseki, governor of the state, and Osagie Ize-Iyamu, who is believed to enjoy the backing of Oshiomhole.

Obaseki and Oshiomhole are not in good terms and this led to factions within the party.

In a statement which Benjamin Atu, his media aide, issued on his behalf, Shaibu said unlike Oshiomhole, Uche Secondus, national chairman of the Peoples Democratic Party (PDP), does not control PDP states.

“The sovereignty of the state can’t be submerged at this critical juncture of our lives. The indirect primary will make it more convenient for INEC to supervise and will be more transparent.

“The APC national chairman is insisting on direct primary because the result of the yet to be conducted direct primary election is already written by him, just waiting to be announced.

“The state is sovereign but not enjoying its sovereignty because some few people are determined to ruin the State by hand twisting the government and Governor as a stooge. What the APC national chairman is doing is trying to usurp the powers of the state governor by thinking and making decisions for the government of Edo state.

“John Oyegun was the former governor of Edo state and he didn’t usurp Oshiomhole’s power in the name of ex-Governor Oshiomhole is not the first ex-Governor in Nigeria. He should give the people and government of Edo state peace to enable them reason collectively together.

“Obaseki is currently the governor of Edo state and his office must be respected because we can only have one governor at a time. He has spoken and there is no going back on indirect primary. Direct primary will heighten COVID-19 transmission and infection at the community stage and the state is not ready for such emergency.“

Shaibu added, however, that no matter the mode of the primary, Obaseki would secure his second term ticket in the primary scheduled for June 22.