Scores narrowly escape death as another building collapses in Lagos 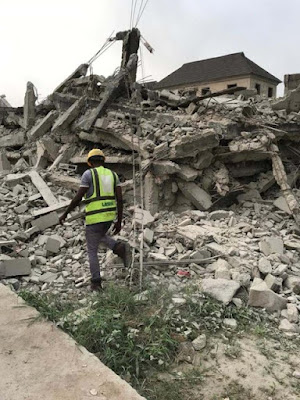 Tragedy occurred in Lagos again in the early hours on Thursday, when a storey building at No 3 Sadiku Street, Alaggba, Iyana Ipaja, suddenly collapsed during a heavy downpour leaving scores injured in the process.

The incident came barely 24 hours after a similar incident occurred at Ogudu area of the state on Wednesday, in which two teenagers, a girl and a boy lost their lives when a building collapsed on them.

The ill-fated storey building which collapsed partially on Thursday consisted of 8 rooms, 23 shops and 1store.

The prompt intervention by the emergency responders to scene saved some injured occupants who were a later taken hospital for treatment.


Director-General of LASEMA, Dr Femi Oke-Osanyintolu, who confirmed the unfortunate incident, said it occurred around 11 am.

According to Oke-Osanyintolu, no life was lost in the tragedy.

He explained, “Upon arrival at the scene of the incident, it was discovered that a storey building consisting of 8 rooms, 23 shops and 1 store had partially collapsed.

“Further investigation carried out by Lagos Response Team, LRT revealed that the adjoining fence to the staircase collapsed.

“This also affected the toilet of the adjacent building. No loss of life(s) nor injury recorded.”

Meanwhile, Oke-Osanyintolu said the affected area was subsequently, cordoned off while integrity testing was also carried out.