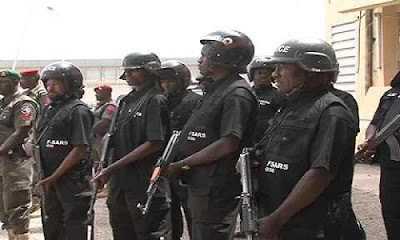 There was pandemonium in Bayelsa and Delta states following the killing of seven policemen in Ughelli, Delta State by Special Anti-Robbery Squad (SARS) for allegedly being involved in armed robbery.

The seven policemen were reportedly shot dead during a gun battle with the Delta State SARS operatives.

According to The Nation, a police sergeant attached to the Bayelsa State command’s armoury was also arrested and transferred to police headquarters, Abuja for allegedly supplying guns to the police robbery suspects.

Though the Bayelsa State Command refused to make official statement on the development, sources within the police confirmed that the incident occurred at night on Wednesday last week.

The Bayelsa State Commissioner of Police, Nkereuwem Akpan, reportedly led a team of officers to the Delta State Command to retrieve the bodies of the seven policemen.

A source said the ranks of the dead policemen ranged from sergent to corpral.

“The reported killing of the seven policemen in the shootout in Delta State is causing uproar at the command,” the source said.

“They were reported to have been engaging in armed robbery when they engaged the Delta Special Anti-robbery Squad in a shootout. They were all killed.”

The Commissioner of Police, Delta State, Hafiz Inuwa, said he was not aware of the development.

But another source from the Bayelsa police command, who spoke anonymously, confirmed the development, saying the incident happened at Ughelli.

He said, “What you said is true. But I don’t want to speak further. Don’t also rule out a case of mistaken identity. There were also some criminal motives attributed to the policemen. They were found where they were not supposed to be. They were carrying guns and at the same time in mufti.”