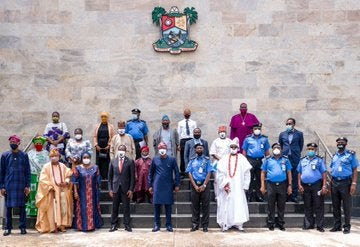 The governor instituted members of the two committees at a ceremony held at the State House in Alausa, according to a statement by his Chief Press Secretary, Gboyega Akosile.

The SCPAC is co-chaired by the state Commissioner of Police, Hakeem Odumosu, and the Chairman of Council of Obas and Chiefs in Lagos, Oba Rilwan Akiolu.


Sanwo-Olu said, “The work that the Police are expected to do becomes more difficult when they are expected to do it alone. No matter how well-resourced or technologically advanced a Police Force might be, there might be no progress without the trust and support of the communities in which they operate. Every citizen has a role to play in ensuring that the security architecture functions optimally.

“We are implementing this policing initiative with the sole objective of creating a platform for citizens’ participation towards improving security in our communities.

“Community policing, in its ideal implementation, will take a lot of pressure off the Police Force and allow them to focus their energy and resources where it matters most. It will give citizens and residents a strong sense of participation in governance, and strengthen the social contract between the Government and the governed. A citizen-centric approach to tackling crime and criminality is a big plus for democratic practice and governance.”