REVEALED: DSS cleared Dongban-Mensem before she was nominated by NJC 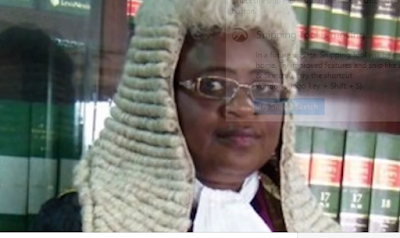 Garba Shehu, presidential spokesman, had said in a statement on Sunday that the relevant security agencies are not done with screening her.

This, he said, was why President Muhammadu Buhari has not forwarded her name to the senate for confirmation but instead appointed her in an acting position.

However, TheCable reports that an NJC insider disclosed that before any judicial officer is recommended to the president for appointment, DSS clearance is a requirement in line with the procedural rules of the council.

The insider said Dongban-Mensem was cleared by the secret police before her name was forwarded to the president for appointment.

“Before NJC would interview anybody, they must have got back a report from DSS and their interview will be based on the report of the DSS,” the source said.

“In her case, she was cleared by the DSS and there was no adverse report about her.

“Her name was sent along with those recommended for appointment in the FCT judiciary and the president is supposed to sign all of them together. But they forwarded everything again to the DSS.”

A senior lawyer, who said he should not be quoted for fear of victimisation, told TheCable that the only role the president is expected to play, as stipulated in the law, is to forward the name of the nominee to the senate.

“If the senate clears her, the president will announce the appointment. If the senate does not, then the NJC will nominate someone else. The president is just a conveyor belt in the process,” he said.

“However, if there is an adverse security report, the president can only send the report along with her nomination to the senate, not take the law into his own hands. Let the senate reject her on the basis of the report.

“More so, Dongban-Mensem was screened and nominated over three months ago. What other screening is the DSS doing that it cannot complete in three months? Or is it the FBI or CIA that will do the screening? For someone who has already been screened and cleared before by the DSS, you have to suspect that there is a game going on.”

Shehu had said on Sunday: “The president has a duty to ensure that all such appointments meet the requirements of the constitution and protecting the supreme law of the land in this regard, he has an obligation to allow law enforcement and security agencies to do their work.

“Don’t forget our recent experience with ministers who were signed off upon and turned out as having not undertaken the compulsory National Youth Service, just to give you an example.”

TheCable had reported dirt-digging is being employed by some presidential advisers to get Dongban-Mensem disqualified and pave the way for Mohammed Lawal Garba, the judge who chaired the 2019 presidential election petitions tribunal that ruled in favour of Buhari.

A source said her national youth service record is being scrutinised