PTF to decide on 2nd phase of lockdown by June ending, says Mustapha 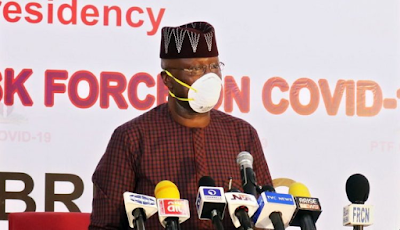 The Presidential Task Force (PTF) on COVID-19) continue to monitor developments nationwide in order to take informed decisions by the end of June, on the second phase of  the lockdown.

Mr Boss Mustapha, the chairman of PTF on COVID-19 and the Secretary to the Government of the Federation (SGF) said this at the daily press briefing on Monday in Abuja.

Early June, the PTF announced a one-month period for the implementation of the second phase of the easing of lockdown.

Mustapha said that while pursuing that line of action, the PTF would like to re-echo the World Health Organisation (WHO), advisory to countries and their citizens not to equate any slow-down in numbers accompanied by loosening of restrictive measures to translate to a reduction in the dangers faced by humanity.

“This signified to the PTF that more testing has been carried out in recent weeks.

“However, we are not deluded that we are getting enough samples to test. I wish to remind all our citizens that the best strategy remains to test, detect, isolate and treat.

“That has accounted for the massive expansion in the laboratory network and testing centers,” he stated.

The SGF said that the PTF has also continued to watch developments from other jurisdictions especially those that have similar climatic and demographics with us.

“Here Brazil is of particular interest. You would have observed that the number of confirmed cases in Brazil have risen to 1,084,833 thus becoming the second highest in the whole world and reporting over 50,000 deaths.

“In Africa, WHO has reported that South Africa, Egypt, Nigeria and Ghana have proportionately been the most affected countries on the continent of Africa.

“All these combined, represent a serious wake up call for us all to be responsive and to take full responsibility.

“Our failure to take responsibility threatens the gains we have recorded which is not good for our large population.

“Let me give you a vivid picture of how this virus has spread across our nation by timelines:

“We really have a choice to make and there is an urgency of yesterday,” he explained.

According to him, as part of the collaboration with the States, the PTF team made up of the Nigeria Center for Disease Control (NCDC), and the WHO Representative visited Plateau, Edo, Lagos and Akwa Ibom to assess the state of preparedness and control.

The PTF chairman said that the visit further gives Nigerians confidence that sub-national levels of governments were also taking the necessary actions to ensure that this fight was speedily won.

Meanwhile, he announced that on June, 20 2020, the PTF received the first batch of equipment supplies under the One-UN Basket fund and the European Union.

“I want to use this opportunity to thank the partners of the One UN Basket and look forward to receiving the second batch of these supplies.

“Their commitment greatly shows that partnership is the most important ingredient needed to overcome this pandemic globally.

“I similarly wish to thank the WHO for the donation of Oxygen concentrators, which has become very vital for case management,” he said.

He added that over the weekend, the Rotary Cub International District 9125, a long standing partner in the fight against polio disease, made a donation of essential materials worth over ten million naira to support the fight against COVID-19.

Mustapha said that the gesture was also very much appreciated.

He, however said that PTF was pleased to express its appreciation to the National Association of Resident Doctors (NARD), for demonstrating the spirit of patriotism and understanding by calling off the industrial action its members embarked upon.

“Abiding by The Hippocratic Oath further gives us comfort that we would win this fight.

“On the part of government, we would continue to ensure the welfare and safety of all workers will never be neglected,” he said.

The SGF said that as the nation pursue the Community engagement and Risk Communication Strategy, PTF had identified lack of information about case definition protocols, location of testing centres, inability to reach call centers, as obstacles to getting needed help.

He said that PTF has therefore directed that more awareness be created on the location of test centers and how to get tested especially when you fit the case definition.

“The call centres are also being re-energized for responsiveness. Our messaging on risk communication and compliance by the public will also receive very strong attention.

“We must develop a national wave of awareness creation to drive home our objectives,” he said.

Mustapha called on Nigerians to make use of these facilities and get tested.

“Similarly, I implore us not to be afraid of undertaking the COVID-19 test.

“Testing positive for COVID-19 is not a death sentence, but failure to test, especially when symptoms are evident could result to death as it may be too late once the symptoms become full blown,” he said.

The SGF said that the death of any Nigerian was not only painful, but most avoidable provided they seek help early.

He said that PTF was also not unmindful of the possibility of imports especially through the land borders.

“For this reason, our men and women of the Nigerian Immigration Service remain vigilant.

“This has resulted in the apprehension of two foreigners who tried to enter the country illegally over the week-end. This commendable effort is appreciated,” he said.

Meanwhile, the SGF said that the declaration of Nigeria as Polio free nation last week was a welcome development and congratulate all those that participated in the long-drawn battle to rid Nigeria of the disease.

“This declaration is a signal that overcoming COVID-19 and indeed any other infectious disease is possible and shall be achieved.

“We use this opportunity to renew our call to the medical practitioners and hospitals not to neglect other diseases and ailments because of COVID-19,” he said.

“Observe them religiously,” the SGF said.