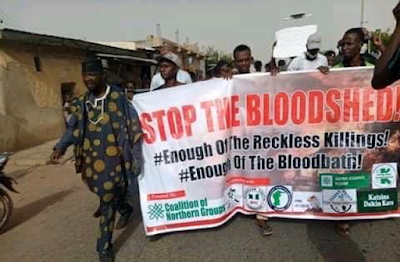 Hundreds of youths in Katsina State, on Tuesday staged peaceful protest over the increasing banditry, killings and kidnappings.

The protest was organised by the National Youths Council of Nigeria (NYCN) and Coalition of Northern Groups (CNG).

The Commissioner of Police, Sanusi Buba, addressed the protestors.

The youths had planned to converge on the Katsina Emir’s Palace, but their plan was scuttled by security agents, who blocked all roads leading to the palace.


However, they passed through Kofar-Durbi to GRA carrying placards with different inscriptions.

Some of them read: “stop the bloodshed”, “do the needful before they finish us” and “banditry and kidnapping are our monsters” among others.

The security agents also blocked all roads leading to the Government House to prevent the youth from getting there.

The state Chairman of NYCN, Katsina State, Lukman Umar-Kankia, said that the state, which was known for peace, is now facing mounting security challenges, including banditry, kidnapping and cattle rustling, among others.

“Bandits operate with brazen impunity, their audacity is appalling. In broad daylight, they sack villages and annihilate the people.

“They rustle animals, raze markets and reduce houses to rubble; they defoliate farms and pillage resources.

“They rape women and abduct men and demand a ransom their relations couldn’t afford,” he said.

He therefore urged the Federal and state governments to intensify efforts in protecting peoples lives and property.

“The government should employ more police for the affected areas, proffer stiffer punishment for anyone found aiding bandits and kidnappers,” he said.

The police commissioner assured them that the government and security agents were doing their best to overcome the security challenges in the state.

“We are aware that we have challenges, these challenges were built up over 30 years, yet some Nigerians want these problems that have been accumulated over 30 years to be solved within a period of months.

“We are determined more than ever before to ensure that these problems are solved, and that is why we have joint security operations to bring the situation under control,” he said.

Buba admonished the youths not to be misguided, and thanked them for conducting themselves in a matured manner.
“Thank God it is a peaceful protest, there was no any violence and when I talked to them, they listened.”