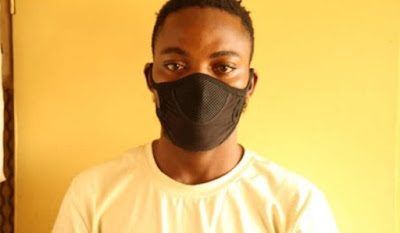 The Lagos state police command has arrested Adeyeye Babatunde, a young man, who was seen in a viral video “inappropriately” kissing a minor.

In the said video, Babatunde, a 400-level botany student of the Lagos State University (LASU), was seen kissing a three-year-old girl, which he claimed to be his step sister, on Tuesday at their residence in Kajola street, Shagamu in Ogun state.

The incident had earlier sparked outrage on social media platforms with a number of Nigerians calling on appropriate authorities to investigate the matter.

Bala Elkana, the command’s spokesman, however, broke news of his arrest on Friday. “It’s true,” he said.

Elkana said his arrest followed the directive of Hakeem Odumosu, the state commissioner of police, to the force’s gender unit to analyse the video and apprehend the suspect.

He added that the suspect has been handed over to the state Criminal Investigation Department (CID) in Yaba for further investigation.

Speaking after his arrest, Babatunde said he had no evil intention while kissing the little girl. He also apologised for his action.

“I am really sorry for what I did. I never thought it would turn out this way. I didn’t have any bad intention doing that,” he said.