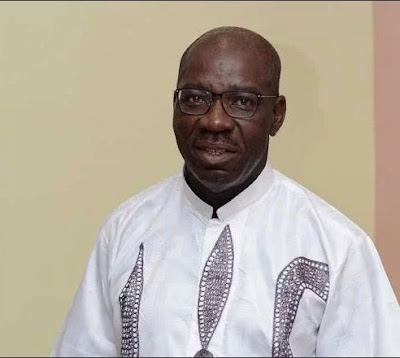 Fresh reports suggest that the leadership of the Peoples Democratic Party has given conditions to the embattled Governor of Edo State, Godwin Obaseki, to fly the party’s flag in the state’s September 19 governorship election.

The offers came following Friday’s disqualification of Obaseki from the June 22 governorship primary of the All Progressives Congress by the party’s screening committee for the election. The governor had, however, vowed not to appeal the decision.


The screening committee, headed by Prof Jonathan Ayuba, said the governor was disqualified because of the discrepancies in his names and certificates and for suing the party in contravention of the party’s rules.

In the report received by the party’s National Chairman, Mr Adams Oshiomhole, Ayuba noted that Obaseki claimed to have obtained a Higher School Certificate from the Institute of Continuing Education in Benin City but didn’t produce the certificate and the document he produced only attested to his attendance.

He further said the governor’s National Youth Service Corps certificate reads ‘Obasek Godwin’ and that it could be an error from the NYSC, an anomaly he said the governor never took any step to correct.

“In our interaction with issues raised, we concluded that (the) HSC was defective; the NYSC certificate and the fact that the aspirant took the party to court. The above aspirant, His Excellency, Godwin Obaseki, therefore, is not eligible to participate in the election,” he added.

Apart from the governor, other disqualified aspirants were Chris Ogiemwonyi and Mathew Iduoriyekenwen.

Those cleared to take part in the primary were Mr Osaro Obaze, Dr Pius Odubu and Pastor Osagie Ize-Iyamu.

Ize-Iyamu, who was the governorship candidate of the PDP in the last election, is believed to be the choice of Oshiomhole and some members of the National Working Committee after the former’s fallout with Obaseki.

The development peaked the lingering disagreements between the governor and Oshiomhole, who is also Obaseki’s predecessor.

Investigations showed that the governor made overtures to the PDP leadership on the possibility of contesting governorship on the party’s platform.

However, to realise his second-term ambition, a highly placed source within the PDP top hierarchy, told one of our correspondents on condition of anonymity that the governor had been in contact with the party. The source stated that the governor was asked to take some steps before he could be admitted to be the party’s candidate in the coming election.

The source added that chief among the conditions was the directive that he (Obaseki) should meet with the three PDP governorship aspirants screened by the party’s screening committee for the primary.

It was gathered that one of the aspirants insisted that he would not step down for the governor.

Though the party had yet to release the screening result, it was learnt that the three aspirants were likely to be cleared for the primary.

It was further learnt that the governor was also directed to meet with the party leadership in the state to seek their support and understanding.

The source said there was no way the national PDP would support the governor without the approval of its officials in the state, including the aspirants.

Investigations showed that the party leadership was afraid that if leaders in the state were not carried along in the arrangement, it could boomerang and lead to the defection of aggrieved members to either the APC or any other political party after the primary.

The source said, “We at the national level are not interested in imposing the governor or anyone on the party in the state. He is going to be their governor and the people of the state are the voters. Our own is to campaign for him and our party.

“The governor is not yet a member of our party. We have laboured to remain relevant in the state and our popularity shows that we are going to win the forthcoming election.

“When that is done, we can talk to him and the people. The governor will also have to meet with the aspirants who have picked our nomination and expression of interest forms and agree on modalities.

“When they agree, we will come in and iron out what to do. For now, we are watching from the sidelines.”

The source added that whatever agreement the governor reached with the party leaders and the aspirants would form the basis of whether he would join the party or not.

Besides, a close aide to Obaseki also said though some political parties were reaching out to the governor to contest governorship on their platforms, he had yet to take any decision.

The aide, who spoke on condition of anonymity on Saturday, disclosed that some leaders of the APC at the national level had also reached out to the governor, promising to intervene in the screening crisis.

He said, “I know that several consultations are ongoing. Between me and you, not just the PDP, but several political parties are with the governor. But he has not given any hint that he is talking to any one of the parties.’’

The APC Screening Appeal Committee on Saturday upheld Obaseki’s disqualification. The decision followed a review of the report of the party’s screening committee.

Chairman of the appeal panel, Dr. Abubakar Fari, who submitted the committee report to the Oshiomhole-led National Working Committee said only one out of the three disqualified aspirants appealed the decision.

Fari said, “We looked at the grounds on which Obaseki was disqualified and I would like to say his disqualification was based on solid grounds.”

Fari added, “We found the screening committee’s findings on the other two as justified. In respect of Mathew, the appeal committee in the course of reviewing the report of the screening committee observed that it failed to make a finding and draw a conclusion of his prejudicial finding of filing a legal action against the national chairman and the party itself. We reached the conclusion that such conduct runs contrary to Article 21 (D) 5 of the party’s 2014 constitution as amended. As a result of that, we upheld the decision of the screening committee that he should be disqualified and he is so disqualified by the appeal committee.” He noted that Obaseki’s case was also reviewed.

Fari said, “This committee finds that although the screening committee disqualified Obaseki on the evidence of the documents he presented, however, the committee did not take into account their contradictions in the various petitions submitted to the committee against him. We take the liberty to highlight these discrepancies.

“In the affidavit sworn to by Godwin Obaseki before the High Court Abuja, he stated under oath that he graduated from the University of Ibadan with a BA degree in Classical Studies in 1976. However, the university certificate he attached to his nomination form bears 1979 which is a material contradiction.’’

The committee also said it found it hard to believe he gained admission to study at the university with three credits without a proper A levels or a diploma.

It also noted that the governor also had two separate voter cards which were illegal, adding that the attestation letter of the institute the governor claimed to have attended was not on the letter head of the school.

The committee also said it found entry inconsistencies in the forms Obaseki submitted for scrutiny.