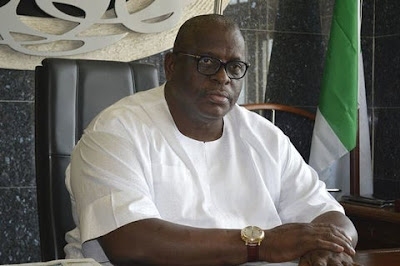 A chieftain of the People’s Democratic Party, PDP, and former spokesperson, Atiku Campaign Organisation, Chief Segun Sowunmi has called on feuding parties in the Ogun State chapter of the PDP to sheath their sword and embrace peace in the interest of the party.

Sowunmi who spoke to journalists in Abeokuta on the crisis rocking the party in the state said the mudslinging and different names callings between Senator Buruji Kashamu group and Bayo Dayo/Hon Ladi Adebutu group is unnecessary, saying that the crisis may have its toll on the fortune of the party come 2023.

“PDP in Ogun state now is in a mess, there is a need for politicians in Ogun PDP to change their orientation, we are making politics too toxic, for decent people to participate”.

“For me, if the intention is to serve and do well for the people, those fighting themselves need not engage in pull him down syndrome. The question is with all their fighting, will they remove each other from the State?”

“Without going into the merit of each of their arguments, if Bayo Dayo completes eight years as Chairman, and all through his term, he was permanently at loggerhead with the national body of the party, and that struggle led to many court cases, many were killed, they deployed a lot of arsenals, and Buruji was the backbone in all these struggles”.

“And at the expiration of his tenure, he ‘repented’ like biblical Saul, turning to Paul, when he now wants to move from Buruji camp to probably to the side of national, or Adebutu side of the table”.

“I would have thought that one of the first things that he will do or tell us is that, they have shared so many secrets among themselves, and therefore, they should think of their individual families, children, relatives, association, wives and even the greater Ogun and PDP, they should not now turn to a public embarrassment by washing their dirty linens in the public”.

Sowunmi added that what is happening between Kashamu and Bayo Dayo “is normal. Even in marriages, divorces take place, people fight; a lot of changes happen; people get frustrated with people and leave themselves for some time or forever, but in all these things, they should remember that there is enough tar to splash on both of them.

“To save the party and themselves from public embarrassment, they should tread softly”.

“I will just call on Senator Kashamu to understand that Buruji Kashamu that came into Ogun political space in 2009, is not the distinguished former Senator of Federal Republic of Nigeria, that has gone to the chamber of the Senate and return in 2019”.

“There is something we called the roll of honour of people in a country. When a researcher, either from America or Europe want to research into the who is who in Nigeria, do you know that he will look at the names of former leaders, he would look into the lists of former senators, former Governors.

“Kashamu’s name will appear on that list as a former Senator. Therefore, he cannot afford not to be mindful of that in his utterances, actions, and in his mode of engagements’.

“Maybe the name Buruji Kashamu was not an asset in 2009 or thereabout, but that name ought to be an asset to his children and grandchildren in the future, now that he has gone to the Senate and returned”.

“What will they now be found on the pages of the newspaper, on the internet? He should elevate himself and instruct that all his followers to ceasefire. This public ranting, social media things should cease immediately”.