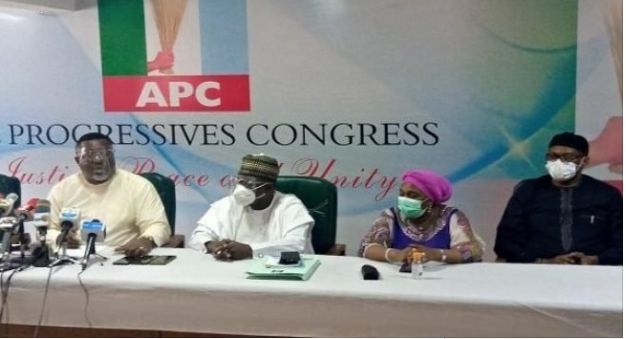 Salihu Lukman, director-general of the Progressive Governors Forum, says the All Progressives Congress (APC) is collapsing with no leader in charge.

The APC has been embroiled in a leadership crisis following the appeal court judgment upholding the suspension of Adams Oshiomhole as national chairman of the party.

But members of the national working committee (NWC) loyal to Ajimobi nominated Hilliard Eta, APC vice-chairman south-south, to act in the place of the former Oyo governor who is “unavoidably absent”.

In a statement on Thursday, Lukman said a national executive committee (NEC) meeting should be called over the party’s leadership crisis.

The director-general said the party needs an “organ transplant” by replacing members of the NWC who constitute a problem to the party.

“It is very clear we need an organ transplant by way of replacing the members of the current NWC who constitute the problem. That the All Progressives Congress (APC) is having a leadership crisis is no longer news,” he said.

“What is news now is that the party is collapsing with no leader in charge.

“Following the appeal court ruling sustaining the suspension of Comrade Adams Oshiomhole as the National Chairman of the party, late on Monday, June 16, 2020, members of the National Working Committee (NWC) of the party started making disparate claims as to who is the acting national chairman.

Lukman said the party could not have people like President Muhammadu Buhari and Bola Tinubu, former governor of Lagos, and still be in a crisis.

“How can a party so blessed with experienced and very skillful leaders such as Asiwaju Bola Ahmed Tinubu, Chief Bisi Akande, Chief Ogbonnaya Onu, Chief Tony Momoh, etc. be incapable of resolving the problem of leadership vacancy,” he said.

“The combined moral authority of President Buhari and Asiwaju Tinubu should have involuntarily moderated the conduct of other leaders of the party, especially members of the NWC.

“Does the current APC leadership crisis therefore suggest declining moral authority of our two leaders? It is very easy to reach conclusions.”