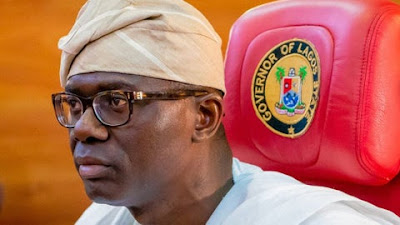 Sanwo-Olu in a condolence message, by his Chief Press Secretary, Mr. Gboyega Akosile described Senator Osinowo’s death as a rude shock, coming at a time when the state and indeed the entire nation had just started benefiting from his wealth of political and administrative experience.

The Governor said Osinowo’s demise had thrown the State into mourning, urging residents, whose interests the late lawmaker represented at the National Assembly to use his death as a reminder that the battle against the ravaging coronavirus pandemic is far from being won.

Sanwo-Olu stated, “The death of Senator Bayo Osinowo is painful. He died at a time when we have just begun to consolidate on our successes and see a ray of hope in our fight against the COVID-19. We must not allow the death of Senator Osinowo to deter us from forging ahead in our quest to finding a lasting solution to the dreaded disease.”


“I am saddened by the death of this fine gentleman; a loyal party man and committed democrat, with a deep understanding of the State’s social and political landscape.”

“Senator Osinowo was an extremely loyal politician, who started his political journey with the progressives and remained in the fold until his unfortunate exit today.”

“There’s no doubting the fact that he would be missed by the entire political class, particularly his immediate constituents in Kosofe, the Lagos East Senatorial District and the State as a whole.”

The Governor added that the best honour to give the deceased would be for government to speedily achieve a turn around in the State’s health sector by ensuring that no single life is lost on the account of poor health.

“We will continue to give priority attention to our health sector, improve on service delivery, training and other critical areas in the sector so as to ensure that no life is lost due to poor health facilities.”

Sanwo-Olu condoled with the immediate family of the departed, national leader of the All Progressives Congress (APC), Asiwaju Bola Ahmed Tinubu, President of the Senate, Ahmed Ibrahim Lawan over what he described as the loss of a “dear colleague.

“I pray that Almighty Allah grant the soul of our beloved Bayo Osinowo eternal rest and grant him a place in Aljannah Firdaus, he said.