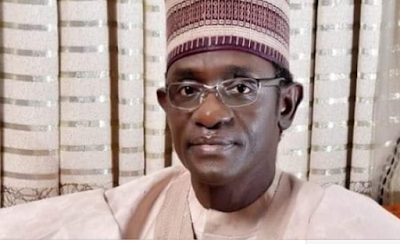 The Adams Oshiomhole-led national working committee (NWC) of the All Progressives Congress (APC) has been dissolved.

Victor Giadom, acting national chairman of the party, announced the development at the national executive council (NEC) meeting of the party at the state house in Abuja.

Mai-Mala Buni, governor of Yobe state, was named chairman of the caretaker/extra-ordinary convention committee while the governors of Osun and Niger were appointed as members.

He was immediately sworn in by Abubakar Malami, attorney-general of the federation (AGF).

President Muhammadu Buhari recommended the dissolution of the NWC which NEC accepted.

But the council ratified all decisions taken regarding the Edo governorship primary election.

The APC was thrown into a leadership crisis after the court appeal upheld the suspension of Oshiomhole as the national chairman of the party.

Gaidom declared himself as acting national chairman but the NWC loyal to Oshiomhole called him an impostor and tussled with him over the leadership of the party.

But Buhari threw his weight behind Gaidom — an action which rankled the NWC.

The Oshiomhole-led NWC had announced it would boycott the meeting, describing the president’s decision to support Gaidom as ill-advised.