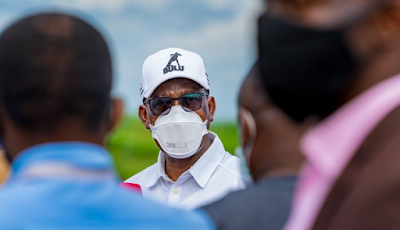 Chief Press Secretary to Governor of Delta, Mr Olisa Ifeajika has said the surge in confirmed cases of Coronavirus disease (COVID-19) in the State was due to increased community testing.

According to Ifeajika, the increased community testing is occasioned by the recent establishment of a testing laboratory in Asaba.

He said the mobile laboratory testing centre has contributed immensely to increased detection and treatment of cases of the virus in the State.

Ifeajika said the establishment of the testing centre in the State was part of pragmatic steps taken by the Governor, Senator Ifeanyi Okowa, in providing needed facilities and personnel to combat the pandemic.


“Before now the entire South-South states were going to Irrua in Edo to test samples, and you can imagine the queue that was there then; it was so until about a month ago when we acquired one testing laboratory in Delta.

“It has given room now for testing more numbers, which as at today, we have tested no fewer than 900 cases,” Ifeajika said in an interview with Arise News Television monitored.

He further stated that when other States were still grappling with what to do about the pandemic, “Delta was proactive in putting necessary things, including personnel in place, and of course, you know that our Governor is a medical doctor and a proactive one at that.

“Twelve holding centres and six isolation and treatment centres, with all equipment and personnel needed are in place, and you will recall that the Director General of NCDC was here some time ago and commended Delta for the facilities put in place.

“Some organisations have also supported us as a government to put other equipment in place, especially in the setting up of two new fully-equipped isolation and treatment centres”.

The spokesman acknowledged that the relaxation of the lockdown in the State to a considerable extent may have contributed to the rising number of confirmed cases of COVID-19 in the State.

According to him, the Governor in his wisdom relaxed the lockdown in response to the people’s yearning to return to their businesses because of the seeming hardship the restrictions engendered.

Ifeajika, however, disclosed that schools, night clubs, bars and lounges were still locked down, adding that the closure of the state’s boundaries ordered by the governor before the Federal Government’s ban on inter-state movement, was in force.

He said that aside from the directive that all prescribed protocols for stemming the spread of the virus must be observed, wearing a face mask in public places, including worship centres and markets, was compulsory in the state, adding that there were penalties for defaulters.

“There are task forces in the markets and other public places and even the police, to enforce compliance with the directives, including the inter-state lockdown.

“There are also mobile courts for that purpose, but largely, Deltans who are aware of the dangers of the virus are comporting themselves and abiding by the rules,’’ he said.

On insecurity and herdsmen menace, Ifeajika stated that it was a challenge in Delta, though it was not peculiar to it as other states were also experiencing the same situation.

He said that Governor Okowa was determined to nip the challenge in the bud, with the establishment of “Operation Delta Hawk” as it had become obvious that the situation was overwhelming the security agencies, especially the Police.

“The governor looked inwards and felt that indigenous policing will help; it will complement the federal agencies in contending with the menace.

“That is the whole essence of Operation Delta Hawk. It is entirely indigenous and its activities will be domesticated so that people will own the security of their territories.

“It’s still in the works; a committee is in place to midwife the process so that it will come out properly,” he stated.