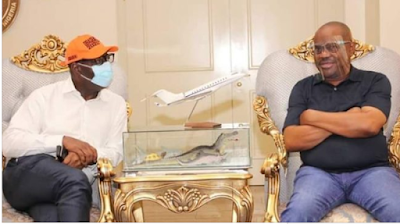 Nyesom Wike, governor of Rivers state, says Godwin Obaseki, his Edo counterpart, was disqualified by someone who doesn’t have a certificate.

This is coming less than 24 hours after the two governors met at the government house in Port Harcourt amid reports that Obaseki might be on his way to the Peoples Democratic Party (PDP).

On Friday, the All Progressives Congress (APC) screening committee disqualified Obaseki from the June 22 governorship primary election, while Osagie Ize-Iyanmu, who is said to be backed by Adams Oshiomhole, the national chairman of the party, was cleared.

Oshiomhole said the national working committee (NWC) of the APC discovered contradictions in the governor’s National Youth Service Corps (NYSC) and higher school certificates.
He has been having a running battle with the governor whom he assisted into power.

“Obaseki was disqualified by someone who doesn’t have a certificate. What an irony!” the governor said.


Obaseki was disqualified by someone who doesn't have a certificate, what an irony !
— Gov N E Wike Information. (@GovWike) June 15, 2020

Earlier in the month, a suit was filed against the governor over an allegation of certificate forgery. The plaintiffs alleged that the governor forged his bachelor of arts (B.A.) certificate in classical studies from the University of Ibadan and asked the court to disqualify him from contesting in the upcoming governorship election.

The University of Ibadan later confirmed that the governor graduated from the institution.

Obaseki also challenged Oshiomhole to reveal the university he attended.