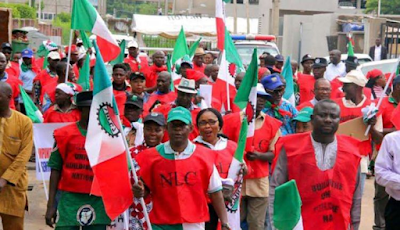 The Chairman, Kano State chapter of the Nigeria Labour Congress (NLC), Kabiru Ado-Minjibir has cautioned against any attempt to slash salaries of workers in the country.

Minjibir, who gave the warning in an interview with newsmen on Wednesday in Kano, said any attempt to reduce the workers’ salaries would be met with stiff resistance from workers in the country.

The NLC Chairman was reacting on the advice given to Federal and state governments by a lawmaker representing Borno South in the Senate, Mohammed Ali-Ndume to slash the salaries of workers.

He described the advice by the lawmaker as `ill-timed’ considering the situation in the country.

“Since workers are not being given palliatives, their salaries should not be tampered with,” Ado-Minjibir said.

Reacting to the ultimatum the NLC gave to the Kano state government to refund salaries it deducted from its members or face strike action, Ado-Minjibir said the deadline would expire on Monday, June 15.

He said committee set by the state government under the leadership of Secretary to the State Government, Alhaji Usman Alhaji had met twice with labour representatives with a view to resolving the issue amicably.

“Discussion is still ongoing on the issue and we will come up with our resolution on Monday, June 15 when the deadline given to the state government would have expired,” he said.

Recall that the Coalition of Labour unions in Kano state had on May 28, issued a 14-day ultimatum to the state government to refund what they described as “illegal deduction” from their May 2020 salaries or face industrial action.