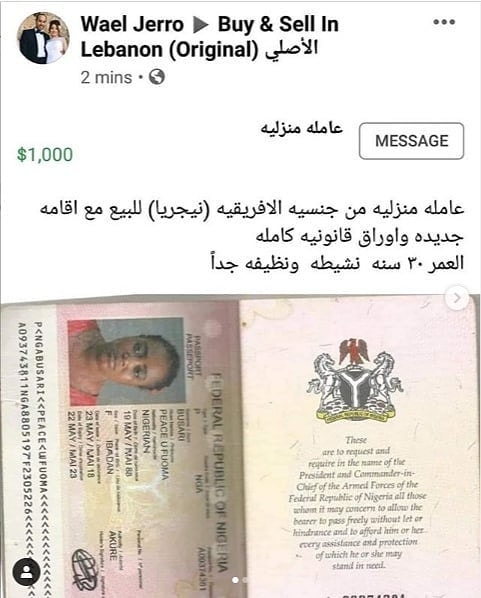 Peace Busari, the Nigerian lady placed for sale on social media in Lebanon has refused to return to Nigeria.

This was disclosed by the Chairman of the Nigerian Diaspora Commission (NiDCOM), Abike Dabiri-Erewa.

Abike Dabiri-Erewa made this known during an interaction with the Lebanese Ambassador to Nigeria, Houssan Diab.

Dabiri-Erewa said: “As for the young Nigerian lady that we were able to save, who was advertised for $1,000, the Ambassador has told us that the culprit is actually a resident in Lebanon. However, the lady is still with the mission. In fact, she has got another job. But the reality is that she said she does not want to come back and she said she has found another job.

“I spoke to her myself on the phone and I told her that if she gets into any trouble, there will be nobody to call. But she said she does not want to come back, that she has found another job.

“Even the Secretary to the State Government (SSG) of Oyo State, where she is from, spoke to her. We just hope that Nigerians going to work in Lebanon will be properly treated and not treated as slaves.

“As the ambassador said, the issue of work permit will be properly looked into. Agents are there collecting and making money and not seeing to the welfare of these people who are going to work”.