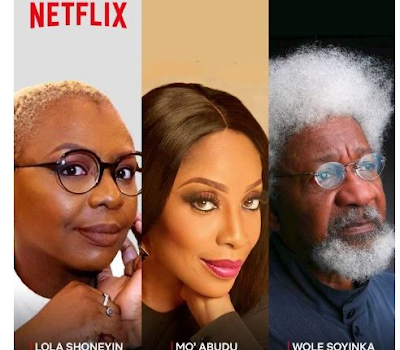 Netflix, US media production brand, has partnered with Mo Abudu, a Nigerian filmmaker, for the film adaptation of books by Wole Soyinka, a playwright, and Lola Shoneyin, a novelist.

The streaming company took to its Nigerian Twitter page on Friday to break the good news. It said the award-winning producer is expected to produce a film and series from the two literary classics.

Netflix specifically said Abudu, who is the founder of the Ebony Life TV, will be producing Soyinka’s ‘Death and the King’s Horseman’, and Shoneyin‘s ‘The Secret Lives of Baba Segi’s Wives’ — which would be premiered on the streaming platform.

“We’ve got major news for you today! Netflix has partnered with acclaimed producer, Mo Abudu, to bring you two of Nigeria’s most beloved literary classics to screens around the world!,” Netflix wrote.


“A series-adaptation of Lola Shoneyin‘s ‘The Secret Lives of Baba Segi’s Wives’ and a film-adaptation of Prof. Wole Soyinka’s ‘Death And The King’s Horseman’!”

It added that Abudu will “produce two new Nigerian Originals plus licensed films and a series” for the media production brand.

‘Death and the King’s Horseman’ is based on an incident that took place in Nigeria during the British colonial rule, where the horseman of a Yoruba king was prevented from committing ritual suicide.

After the preventive intervention of Britain, the 1975 play sees Soyinka question the horseman’s conviction on suicide, having posed a problem that threw off the community’s balance at the time.

The ‘Secret Lives of Baba Segi’s Wives’ illuminates the struggles connecting the experiences of women in the country while detailing the practice of polygamy.