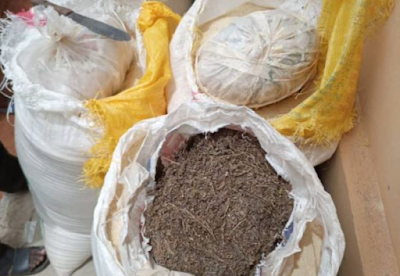 Officers of the National Drug Law Enforcement Agency (NDLEA) in Edo State have foiled a criminal attempt to smuggle eighty-three (83) kilograms of cannabis sativa concealed inside sacks of garri out of the State amidst the covid 19 lockdown.

According to him, “officers attached to the Auchi Area command acting on intelligence report raided the popular trailer park at Aviele where the dried weeds of cannabis hidden inside eight (8) sacks of garri were intercepted while preparing to smuggle the drugs out of the State. This is a very successful operation and I commend the officers for their commitment and ingenuity”.


While describing the mode of concealment as “cunning”, the commander said that preliminary investigation had revealed that a local cannabis snuggling cartel in the area is behind the cannabis consignment.

In a related operation at Uzebba forest, the command also recovered twenty (20) kilogrammes of cannabis seeds and thirteen (13) kilogrammes of dried weeds that tested positive for cannabis. The commander, therefore, warned that drug traffickers in the State must quit the criminal act or be prepared for the legal consequences.

“The early detection of the drugs despite the mode of concealment is a clear signal that the activities of cannabis cartels cannot escape our strict supervision. We are prepared to remain proactive in our counter- narcotics efforts. This way we will continue to subject drug traffickers to the laws of the country to serve as a deterrent to others who might be tempted to indulge in drug trafficking” the commander warned.