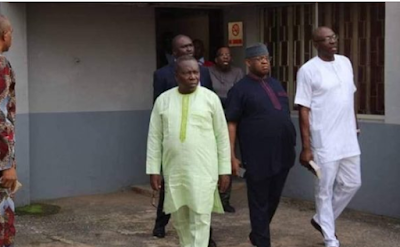 Ize-Iyamu is contesting for the state’s governorship election on the platform of the All Progressives Congress (APC) and he is said to be backed by Adams Oshiomhole, suspended national chairman of the party.

He was formerly a member of the Peoples Democratic Party (PDP) and had contested the governorship election as a candidate of the party in 2016.


Ize-Iyamu and the other defendants were first arraigned on an eight-count charge bordering on money laundering in May 2018.

The money was alleged to be part of the proceeds of “an unlawful act”.

At the sitting on Thursday, Francis Jibro, prosecution counsel, told the court that the matter was for ruling on the competence of the charges preferred against the defendants.

M.G. Umar, the presiding judge, ruled that the charges filed by the EFCC against the defendants “were not defective”.

The defendants had, at the last sitting, challenged the charges on the ground that they contained the name of Tony Anenih, a founding member of the PDP, who is now deceased.

After the ruling, Charles Edosomwan, counsel to the first defendant, told the court that he has filed a motion challenging the jurisdiction of the court.

“In spite of the ruling, we have a motion dated June 1, 2020, challenging the jurisdiction of this honourable court to entertain proceedings,” he said.

However, the prosecuting counsel objected, saying based on the ruling of the court which found the charges not defective, the next thing for the defendants was to take their pleas.

He said the defence counsels were not to dictate to the court.

“The stage is set for us to proceed based on the ruling of the court this morning, not this motion. My Lord has ruled that any objection can be taken after plea has been taken. No exception,” Jibro said.

The case was, thereafter, adjourned to July 2 for hearing.