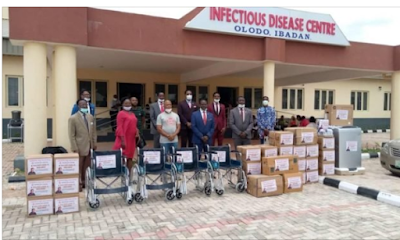 The Oyo state government says it has so far spent N2.7 billion on palliatives, security and medical supplies as part of efforts to contain the COVID-19 pandemic in the state.

Akinola Ojo, commissioner for finance, made this known in a statement issued on Tuesday.

Giving a breakdown of the figures, the commissioner said the amount was spent on setting up of treatment and isolation centres, procurement of palliatives and seedlings for a section of the residents and farmers, procurement of ambulances and the security of the state’s borders, among others.

“A total amount of 378 million naira was donated into the state endowment fund, with other financial contributions that could be estimated to 1.177 billion naira, and also an expectancy of about 100 million naira to the state by the Nigeria Centre for Disease Control (NCDC).”

He said donations made to the state remain untouched as expenses incurred have been solely state government funds.

The commissioner, who said the state has approved a total of N15,000 per health worker as hazard allowance, disclosed that the allowance from March 2020 will be paid this month.

He added that journalists and other frontline workers might be paid hazard allowance after due consideration.