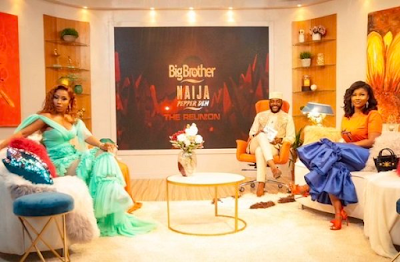 Mercy Eke and Tacha Akide, two former housemates of the Big Brother Naija reality TV show, were once again in the spotlight during the day 10 of the ongoing reunification of the show.

Since the end of the 2019 edition, the reality stars have continued to make the headlines for various reasons, especially due to the apparent lingering feud between them.

Tacha maintains a huge fanbase who named themselves as ‘Titans’ while those supporting Mercy are called ‘Mercenaries’. Their huge fan base are also very fond of calling out one another on social media platforms.

The duo appeared on Wednesday’s episode of the reunion organized for ex-housemates of  the ‘Pepper Dem’ edition and as anticipated, their presence resulted into several dramas

During the show, Ebuka Uchendu, the host, had asked them series of questions bordering on the rumoured bitter relationship between the pair.


Tacha had revealed that she was on good terms with Mercy, until Cindy, another former housemate, made her lose her cool resulting in the open confrontation with Mercy and eventual eviction.

The two also pointed out that their alleged rift is not as deep as it is often depicted, noting that such is often triggered by their teeming fans on social media.

The duo ended the show on a promising note, suggesting an end to the persistent feud between them could finally be over.

Both of them admitted their relationship had largely been marred by miscommunication while they expressed willingness to let go of the past.

As expected, their fans have since taken to Twitter, to air their views on the duo’s utterances at the episode 10 of the reunion.