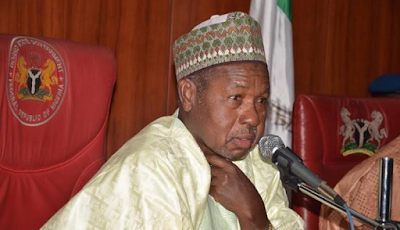 Governor Aminu Bello Masari of Katsina State, has directed the continued closure of all Islamiyya and Almajirai (allo) schools, street begging and holding of ceremonies across the State.

According to a statement which was signed by the Secretary to the state Government, SGS, Mustapha Muhammad Inuwa, said the Governor gave the order, after a review meeting between the Government, Security Chiefs, Islamic Religious leaders, Ulamas, members of the State COVID-19 Emergency and Response Committee and other stakeholders, at Government House, Katsina

‘‘While the order for the closure of the schools is still in force, the Governor has directed security agents to arrest and bring to book anybody defying the order”


”The Governor has also banned street begging throughout the State, hence anybody found begging in the street will be arrested and his tutor or Parent will face full wrath of the law”

The Statement further reminded members of the public to continue observing the health and security protocols such as wearing of face mask, maintaining of social distancing, regular washing of hands with soap and use of sanitizer and avoiding large gathering.

The Governor further assured the citizens of Government’s commitment to review any COVID-19 order depending on the situation.