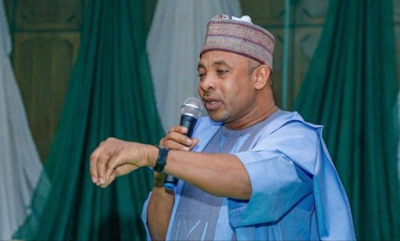 Nastura Sharif (pictured), chairman of the board of trustees (BoT) of the Coalition of Northern Groups (CNG), has been arrested by the police in connection with the protest against the insecurity in the north.

On Tuesday, some members of the group protested in Katsina, calling on Aminu Masari, the governor, to resign if he could not guarantee the security of lives.

They also demanded action from the government of President Muhammadu Buhari.

In a statement on Wednesday, Aminu Adam, the group’s director of operations, said the police arrested Sharif after “the peaceful protest”.


He explained that after the protest, Sanusi Buba, the state commissioner of police, invited leaders of the group for an interactive session in his office.

Adam said five member of the group, including himself and Sharif, had honoured a police invitation after which theb group’s leader was detained.

“After the protest ended peacefully, the Katsina state police commissioner, Mr. Sanusi Buba, invited us to his office for an interaction during which he told us that the Inspector General of Police wanted to see Sharif,” he said.

“The commissioner handed us to a team of policemen, headed by the OC (officer in charge), federal operations bureau (FOB), who led us to Abuja.

“We drove from Katsina to Abuja with the police team in a white bus and a hilux. However, on getting to force headquarters in Abuja, they told us that Sharif is under arrest for the protest and they put him in detention.”

Frank Mba, force public relations officer, neither responded to calls nor responded to text messages as of the time this report was filed.

On Monday, a coalition of northern youth groups asked President Muhammadu Buhari to sack the service chiefs over the rising insecurity in the north.

The Northern Elders Forum (NEF) also expressed concern over the high rate of insecurity in the north, accusing Buhari of failing to address the security challenges in the region.